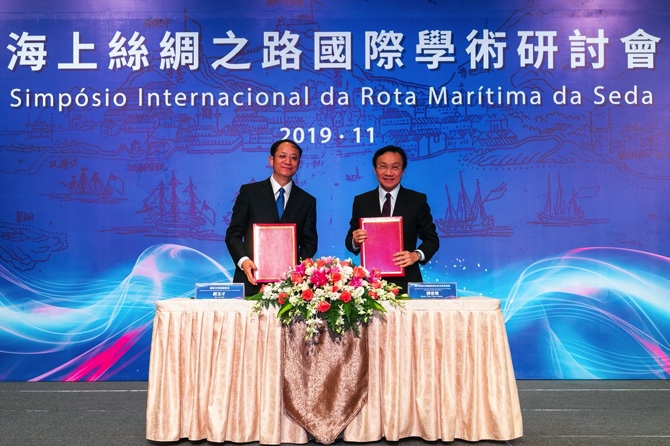 The Macau government will work even harder to develop and preserve the Maritime Silk Road, Leong Wai Man, deputy director of the Cultural Affairs Bureau, pledged to a symposium Wednesday evening.
Her comment was made during the closing address on the bureau’s behalf. Leong also recalled that Macau has been a crucial part of national-level events related to the preservation of the Maritime Silk Road since 2015. The city has been admitted to a coalition working to preserve the road.
The symposium has built a foundation on which future work on the Maritime Silk Road can be conducted. “Macau will continue to be the bridge and an important point on the Maritime Silk Road,” the deputy director said.
The International Symposium of the Maritime Silk Road was held on Wednesday, featuring presentations by experts and professionals from as far as Singapore. It also saw the signing of a cooperation agreement, in reference to the Agreement on Facilitating Heritage Conservation and the World Heritage List Nomination of the Maritime Silk Road.
This high-level agreement serves to assist further cooperation in the field of cultural heritage for the Maritime Silk Road, reinforcing the preservation of the cultural heritage and facilitating its nomination for inscription on the World Heritage List.
It was held to facilitate the nomination of the Maritime Silk Road for inscription on the World Heritage List and to deepen the foundation for academic research on its universal value and conservation.
Being held in Macau, the symposium was also an occasion to introduce Macau’s position and value to the Maritime Silk Road. As such, a presentation on Macau was given by Kuan Chon Hong, senior technician in cultural heritage research and planning at the Cultural Affairs Bureau.
The senior technician started his presentation by showing 22 old maps of Macau, drawn by British cartographers. The maps recorded the entire area of China. These maps show that Macau, in that period, was prominent in the Western perspective. The city is strategically located in the middle of the Maritime Silk Road. According to Kuan, Westerners back then would understand China through Macau. In other words, their knowledge of China was obtained from Macau.
Afterwards, he showed another world map, drawn by a Jesuit priest, which shows maritime routes that ended in Macau. The maps were used to highlight both the historical closeness that Macau possessed, and still possesses, with the Maritime Silk Road.
Kuan later introduced the origin of road and roadmaps in Macau. He said that the earliest roads in Macau dispersed from the earliest pier, or berth.
The reason behind this was not mysterious, for both cargo and passengers needed roads that led them away from the pier.
Macau was a fishing village at the south of China. Originally the planning of the city was very Chinese, with a lot of details hinting at the characteristics of Feng Shui.
When the Portuguese first arrived in Macau, they did not build city walls. They tried to do business with the Chinese. The reason behind this was that “the Portuguese found invading China [was] not an option,” explained Kuan, “unlike their existence in other places.” The arrival of the Portuguese in Macau was rather peaceful. They asked the Ming dynasty government if they could stay and trade in Macau.
Only when their business progressed and expanded well did the Portuguese realized that a fortresses and walls were crucial. Their business had captured the eyes of the Dutch, who had invaded Macau several times. Indeed, the name of the Macau car racing circuit, Guia, was the name of the Dutch invaders.
The Portuguese then built walls to surround their residences. This has eventually affected Macau’s planning to today. From current maps of Macau, it can be seen that walls were built surrounding fortresses.
Kuan further explained that the Maritime Silk Road has brought in most people from around the world “for spices and for souls.” This slang vividly explains navigators’ aims in Macau. People who came to Macau included traders and missionaries.
The current Old Protestant Cemetery and traces of Kraak procelain are proof of the presence of the British and Muslims in Macau. Kuan concluded that Macau was a prominent part of the Maritime Silk Road.
During the symposium, the Secretary General of the International Council on Monuments and Sites (ICOMOS), Peter Philips, referred to the Convention concerning the Protection of the World Cultural and Natural Heritage as a starting point and mentioned the conditions, the significance and the importance of the nomination of the Maritime Silk Road for inscription on the World Heritage List.
The president of the Chinese Academy of Cultural Heritage, Chai Xiaoming, analyzed and elaborated further on the Maritime Silk Road system from various perspectives.
Associate Professor Jun Kimura from Tokai University in Japan presented research results on the archaeological heritage of trade along the Maritime Silk Road.
Wan Ming, a researcher from the Institute of History of the Chinese Academy of Social Sciences, shared his research findings on the rise of Macau and on the maritime silver road.
The symposium was co-presented by the Secretariat for Social Affairs and Culture, and the National Cultural Heritage Administration of China.