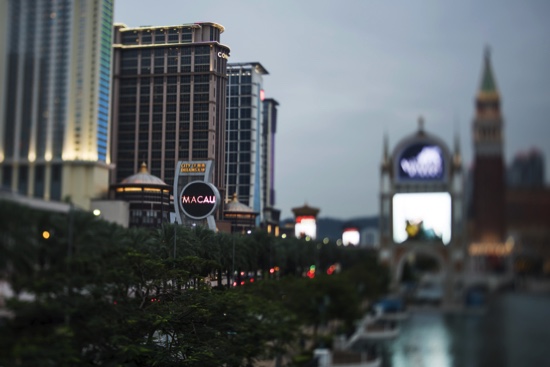 Gross gaming revenue fell 34.3 percent to 231 billion patacas (USD29 billion) last year, according to data released by Macau’s Gaming Inspection and Coordination Bureau. That compared with the median estimate of a 35 percent decline from nine analysts surveyed by Bloomberg. While casino takings dropped 21.2 percent in December – falling for the 19th straight month – that represented the smallest year-on-year decline since last January.

Macau’s six gambling houses have seen about USD45 billion in market value wiped out this year amid a free-fall in casino receipts, as China’s corruption crackdown scared off high-stake players and a slowing economy hurt mass-market gambling. Stricter government policies and key personnel changes, including a new regulator and adviser to oversee gambling, could further impact the hard-hit industry.

“Macau has seen much greater pain in 2015 than everyone expected at the beginning of the year,” Aaron Fischer, head of consumer and gaming research at CLSA Ltd., said before the data was released. “It would be difficult for the first half of the year for sure because there’re not so many catalysts to drive a rebound.”

Macau’s casino industry, which raked in gambling revenue about seven times more than the Las Vegas Strip in 2014, has seen its lead on the U.S. casino district narrow to about 4.6 times in the first 11 months of last year amid the slump. The Nevada gaming regulator will publish Vegas’ December figure in the new year.

The high-valued punters known as VIPs, typically measured via their favorite card game baccarat, have led the downturn. VIP revenue, which accounted for more than half of Macau’s total gambling receipts, saw a 41 percent drop in the first nine months of 2015 compared with a year ago.

Macau’s VIP gambling segment is set to fall another 13 percent in 2016, compared with a 6 percent rebound for the mass market, according to the median estimate of analysts surveyed by Bloomberg. High-stakes gambling will only recover in 2017, rising by 1 percent versus 11 percent growth for the mass market the same year, the survey showed.

Analysts are forecasting another 5 percent decline in 2016 before rebounding 7 percent in 2017. A continued liquidity squeeze in the junkets industry – middle-men operators who bring in high-rollers and lend them money to gamble with – is expected to cause further pain to the VIP segment.

The case of an alleged theft in September by an employee of junket operator Dore Entertainment prompted some investors to withdraw funds from the company and other junkets, causing a liquidity shortage and curbing high-rollers, according to Nomura Holdings Inc.’s Richard Huang. The analyst said he cut his 2016 revenue estimate to a 9 percent drop from a 5 percent growth as weakness in the VIP segment may persist.

Potential bright spots could come from new casino resorts by three Las Vegas-based operators due to start in 2016, after projects opened by Galaxy Entertainment Group Ltd. and Melco Crown Entertainment Ltd. last year. Wynn Macau Ltd. will have a new resort surrounded by cable cars and Sands China Ltd.’s features a half-size Eiffel Tower replica, while MGM China Holdings Ltd. designed one to look like a stack of jewelry boxes.

While Melco’s October opening of the Hollywood-themed Studio City hasn’t translated into much of a boost for the industry, Fischer said he sees the addition of more new resorts helping improve customer traffic to Macau, with individual owners gaining market share when their projects start operations.

Any recovery could still be hampered by stricter government policies, such as tougher restrictions on smoking, junkets and gaming tables, as well as closer scrutiny on the use of China UnionPay Co. debit cards. The cards are commonly used by patrons to purchase luxury items in exchange for cash to gamble with.

There could be further shakeup in the industry next year. Macau is in the midst of reviewing operators’ performance and contributions to the city in the past decade, the result of which will be used to help the government map out the industry’s future development. The operators’ 20-year concession contracts will come up for renewal from 2020 to 2022.

Times have changed. Macau, which offered favorable policies to gambling houses to help boost the economy when it liberalized the market in 2001, may become stricter with gaming rules, said Carlos Siu, an associate professor of gaming research at Macao Polytechnic Institute. This can be achieved with the help of those with legal experience in the industry, he said.

Lionel Leong, the city’s Secretary for Economy and Finance, in November appointed former assistant public prosecutor-general Paulo Chan as the new head of the gaming regulator to help further strengthen oversight over the industry.

Leong’s office has also hired Antonio Lobo Vilela, a Portuguese lawyer specializing in Macau gaming law, as his adviser on gambling issues and he’s due to start in the new year, according to a person who asked not to be named because the person isn’t authorized to speak to media. Vilela was charged with drafting the gaming legislation and concessionaires’ contracts when the city opened up the gaming market. Requests for comment from the department had yet to be answered by the time of this article’s publication.

“There are few people who are familiar with gaming law” in Macau, said Siu who has a decade of experience in gaming research. “An experienced adviser can help the new director have a more thorough understanding about Macau gaming history before he evaluates how to amend to law to balance interest of all parties.” Daniela Wei and Moxy Ying