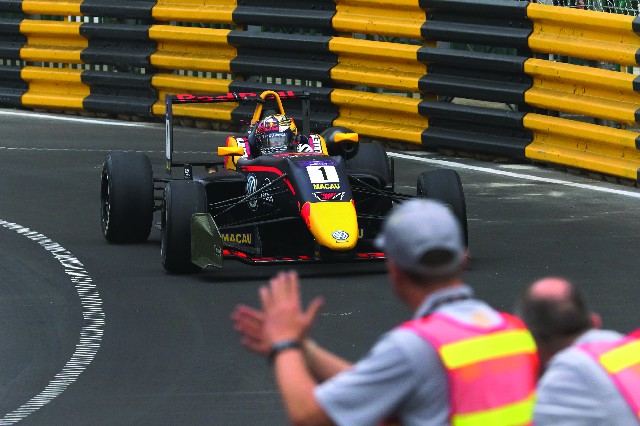 With less than one month to go until the Macau Grand Prix kicks off this year, the Macau Grand Prix Organizing Committee (MGPOC) yesterday released the almost complete entry lists for this year’s event.
A press conference event held at the Macao Science Center presented the lists of entrants for the six-events weekend. Several unexpected names featured.
One of the biggest surprises of the day was the announcement of the unexpected return of two-time Macau winner Dan Ticktum to defend his F3 World Cup title.
The entry of the British racer is particularly unexpected as Ticktum, after winning in Macau last year, was involved in a series of issues, namely with his major sponsor, Red Bull. These issues took him away from a bid for a seat on one of the team’s single-seaters on Formula 1 (F1). Eventually, Ticktum ended up spending a season at Japanese Super Formula with Team Mugen Honda.
If that seemed to be a poor outcome for the man who was known as Red Bull’s leading junior driver, this position allowed him to participate in the first day of official Formula 1 testing with Aston Martin Red Bull Racing during the first in-season test in Bahrain in April this year, as well as the second in-season test in Barcelona one month later.
However, in late June, Helmut Marko, Red Bull F1 program advisor, announced that Ticktum was no longer a member of Red Bull’s Junior program. Ticktum only completed the first three rounds of Japanese Super Formula this year, scoring one single point from an eight-place finish on the first round in Suzuka.
Now Ticktum seems to have found his way up, surfacing as title defender and attempting to make history by claiming a third successive Macau GP success.
Ticktum lines up for Macau F3 race this year with Carlin Buzz Racing. Alongside the British driver will be American Logan Sargeant and Brazilian Felipe Drugovich who have been racing with the team all season.
To free a seat for Ticktum, the team dropped Japanese Teppei Natori who had a very difficult season in the series, scoring only one point and placing 24th overall.
Other surprises in this racing event have to do with the swapping of drivers across teams. For instance, the entry of David Schumacher with Sauber Junior Team by Charoux came as a surprise as he had signed an agreement with Campos Racing less than three weeks ago leading to his participation in the last race of the season in Sochi, Russia.
Now, the German who carries the name of one of the most successful families in formula racing is making his debut in Macau with Sauber which has completely changed its lineup of drivers for Macau.
Alongside Schumacher will be the experienced Callum Ilott who made the all-season on Formula 2 this year and will take the opportunity to break into the F2 championship.
The third seat on Sauber’s lineup will be also occupied by another surprise driver, Enzo Fittipaldi, the young Brazilian grandson of the two-time Formula 1 champion Emerson Fittipaldi. He is climbing his way up the ranks following a great season this year at the 2019 Formula Regional European Championship (former F3 European Series). Fittipaldi currently occupies the second position of this championship, with only one round left to be raced, this weekend in Monza.
In response to media questions regarding the absence of German racer Sophia Flörsch from the entry list, who was believed to be making a return to Macau, the president of the MGPOC, Pun Weng Kun said, “[the driver] does not have any experience with the new specifications Formula 3 car and so she cannot participate as this is a requirement from the FIA.”
At the same opportunity, Pun noted also that the works on the buildup of the Circuit are running well and assured that by “the first week in November, all the infrastructures and facilities will be ready.”

As the Times reported on Wednesday, several big names from the motorcycle racing world have decided not to join this year’s Macau Grand Prix. However, some other names that have been absent from the race in the last couple years are making their comeback.
Among the most noted is Ian Hutchinson, who will return to racing action this November aboard a BMW from Team Milwaukee with SMT, after having missed several events due to severe injuries.
The 16-time Isle of Man TT winner makes his return to Macau on a BMW, after having competed in this year’s North West 200 and TT with the official Honda team, albeit without much success.
Still recovering after accidents back in 2010 and 2017, Hutchinson announced his return to Macau three years later to try to end the dominance of the three-time race winner Peter Hickman, and eight-time winner Michael Rutter. RM