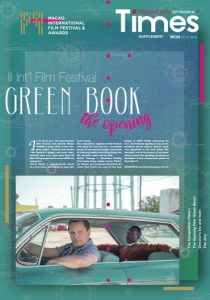 The International Film In its third year, the International Film Festival and Awards Macao (IFFAM) is back. With a new category added – Chinese new cinema – the festival is bigger and more international than ever with more than 40 films being projected in seven different categories. ‘Green Book,’ a comedy-drama based on a true story, was chosen to open this year’s event. The competitive segment of the festival will again be overseen by a renowned group of international judges composed of industry leaders from Hong Kong, the UK, Australia, India and the USA. Mabel Cheung, a filmmaker hailing from Hong Kong, Indian actress Tillotama Shome and renowned Australian director Paul Currie are some of the new judges at 2018 IFFAM, enhancing the true international quality of the event. Academy Award winner, Nicolas Cage, was appointed as the new Talent Ambassador and he forewarns of his attendance at both the opening ceremony on December 8 and a masterclass given on December 9. IFFAM 2018 runs from December 8 to 14.