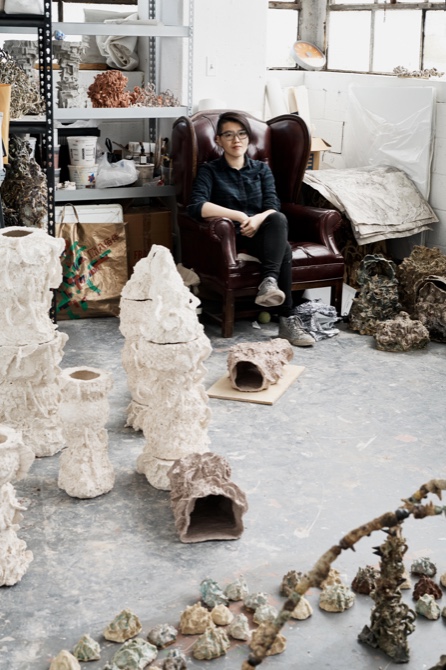 Heidi Lau in her atelier

Lam Sio Man and Heidi Lau’s exhibition proposal, “The Manifesting Shadow,” by has been selected to represent Macau at the 58th Venice Biennale International Art Exhibition, which will be held May 2019 in Venice, Italy.

The winning proposal was submitted by curator Lam and artist Lau. Lam is currently studying a master’s degree in Visual Arts Administration at New York University and has curated exhibitions at the Museum of Chinese in America in New York. Lau has obtained a bachelor’s degree in fine arts at New York University, and her art has been exhibited in and collected by museums and art galleries in New York several times.

A statement issued by the Cultural Affairs Bureau explains that “the exhibition aims to deconstruct the current simplified ‘image’ of Macau and reveal its intricate cultural identity.”

The selected work “reflects on the monstrosity embedded in Macau by tracing history, personal memory, religious beliefs, gaming and other entertainment activities. Such monstrosity refers to the diversity of cultures, the mix of various religions, of tradition and modernity and of the reality and the illusion, which not only reveal the hybrid context of Macau in the abstract but also convey the significance of art expressiveness, forms and concepts themselves.”

A total of 15 exhibition proposals by 36 local curators and artists in groups were received in this open call. The jury, comprising of the director of Macao Museum of Art, Chan Kai Chon; the chair of Academic Board at Today Art Museum in Beijing, Huang Du; the director of Museum of Contemporary Art in Taipei, Yuki Pan; the acting director of Hong Kong Art School, Chan Yuk Keung and exhibiting artist at the Macau-China Pavilion at the “57th Venice Biennale International Art Exhibition”, Wong Cheng Pou, held meetings on October 12 and 13.

This is the sixth time that the Macao Museum of Art has participated in the Biennale under the name of “Macao-China” since 2007. This time, the Macau Museum of Art will join the two local young female artists to manifest Macau on the world stage.