Macau regatta, the only int’l sailing event in GBA this year 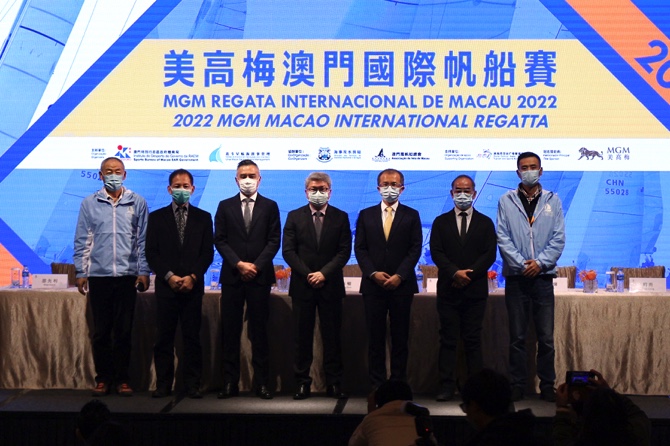 The 2022 MGM Macao International Regatta, scheduled to set sail today, will be the only international-level sailing event to take place in the Greater Bay Area (GBA) this year, Shao Xianli, Chairman-Jury of the event, said yesterday at a press conference from the organizers.

During the press conference, Shao said he hopes that all participants can enjoy and make the most of this event as it will be the “only international sailing event [to take place] this year in the Greater Bay Area,” noting further that he hopes it will be a fruitful one.

The event, which runs from today until Sunday, involves 35 teams divided into three categories. These are: the Guangdong-Hong Kong-Macao Greater Bay Area Cup Regatta, for vessels classified under the International Rating Certificate (IRC), which allows different vessels to race together according to a performance handicap; the Macao Cup International Regatta, in which all competitors will be using Beneteau First 40.7 vessels; and the International Catamaran Invitational competition in which Hobie16 catamarans will be used.

A plurality of teams (14) will compete on the Hobie 16 catamarans in the event to be held at the waters south of the Inner Harbor channel off the Macau Science Center.

This competition will also be the closest to the spectators, as it can be observed from both the Peninsula and Taipa shorefronts.

At the press conference, the president of the Sports Bureau (ID), Pun Weng Kun, said that through this event, people in Macau would hopefully become more interested in sports in general and on water sports activities in particular, expressing hopes that the public will not only watch the races but also take part in a series of side events including sailing demonstrations, workshops and a photography competition which will run concurrently with the main event.

“Macau is a vibrant city and we hope that during their stay, participants and guests [for the event] they can [sense] our sports culture as well as our traditions and tourist attractions,” Pun also said.

In his turn, Kenneth Feng, president, chief Strategic and financial officer of the title sponsor of the event, MGM China Holdings Ltd, noted that the event is a perfect metaphor for the start of the new year, which is time to “set sail on a new journey.”

Feng also noted the significance of the event which will include around 300 sailors as well as international judges and umpires certified by the World Sailing, who, by coming to Macau to participate in this event, will prove that Macau is a “safe travel destination for all.”

Feng also noted the historical importance of the marine event in a region historically connected to the rest of the world by the sea, expressing hopes that through sport, Macau would enter a new era of international water sports, fostering the cross-industry development of the “Tourism + Sports.”

one team in each category

The Macau Special Administrative Region (MSAR) will be represented in the competition by one team in each sailing category. In the IRC, the Macau flag will be flown by the FMA Marine Linglang Sailing Team who will set sail on a Tartan Ten 33 sailboat led by skipper Xu Xingpang. U Chio U will captain the Beneteau First 40.7 from Wanboofish Sailing Team, representing Macau on the Macao Cup International Regatta. Finally, Gonçalo Lestro and José Ferreira Pinto will represent Macau in the smaller sailing competition as Team Vidrinhos.

In total, the regatta counts on the participation of several international participants from countries including Portugal, Canada, South Africa, Japan, Germany, and the Netherlands on top of a majority of Chinese participants from several regions, including many experimental sailors from the Island of Hainan.

Sail past today and Sunday

In one of the events promoting the 2022 MGM Macao International Regatta, a sail past will take place today and on Sunday, January 16, starting around 9 a.m.

The sail past, composed of sailboats participating in the competition will sail from Macau Fisherman’s Wharf area, pass the Macau Science Center, the Kun Iam Ecumenical Center, and the Governador Nobre de Carvalho Bridge, making a U-turn beside the Macau Tower to return to the waters at the southeast of the Peninsula by the same course.

The population may watch the colorful parade from boats next to the shore between the Science Center and the Macau Tower.