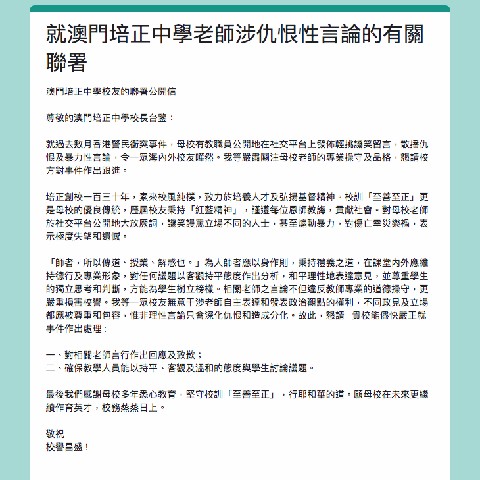 An alumnus of the Pui Ching Middle School has allegedly been threatened after petitioning against social media posts believed to be written by a teacher of the school.
The event was first unearthed on a social media influencer page. Several screenshots were posted on the page, saying that a teacher at the Pui Ching Middle School made hate comments on the situation in Hong Kong. The name of the user making the original posts was censored.
In one of the screenshots, it is stated that “an ultimatum [was given] to the protesters, also known as the cockroaches or the righteous: if you don’t dismiss and in turn obstruct my travel plans, I will take revenge on you – an eye for an eye – up to 10 folds.”
The social media influencer wrote in another post that some alumni of the school joined together and petitioned against such hate comments to the school.
In the petition letter, the group of alumni cited the motto of the 130-year-old school, which emphasizes benevolence and righteousness.
The alumni found the violence-inciting comments to be “disappointing and regrettable.” They reiterated that they respect freedom of expression as far as rational comments are concerned.
At the end of the letter, they asked the school to respond to the teacher’s comment and ensure an objective and reasoned attitude in discussing the issue.
The social media influencer then reported that the teacher had threatened an alumnus who posted an open letter condemning the teacher’s post and calling for its deletion. Otherwise, the teacher will “take the case to a Criminal Court, suing [the alumnus] for defaming [the teacher].” Such threats were allegedly made via phone calls and mobile messages.
The open letter was reported to have been deleted by the alumnus, who hoped to resume a peaceful life.
In September, the head of the Education and Youth Affairs Bureau, Lou Pak Sang, told a press tea gathering that the bureau did not want teachers to bring political requests into campuses, especially to influence students with their own political ideas and understandings.
Meanwhile, local public broadcaster TDM reported that the school had refused to comment on this particular case, while the education regulator reminded teachers to “adhere to the professional ethics and conduct of teachers, and focus on educational works.”
On the other hand, the vice head of the bureau, Kong Chi Meng, said so far there has been no record of severe psychological disturbance caused by the incidents in Hong Kong. Staff Reporter