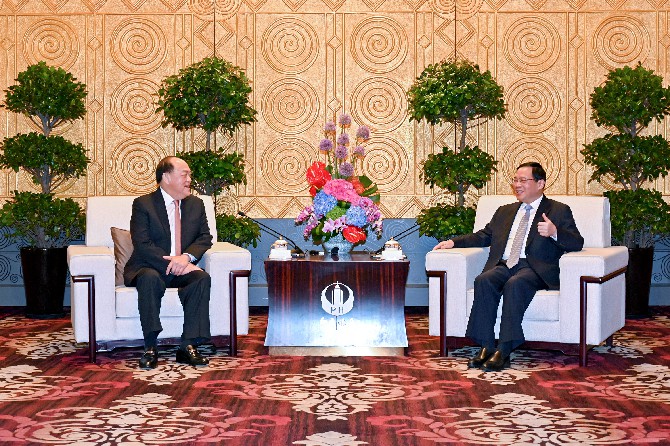 Macau and Shanghai signed five agreements during a conference attended by Chief Executive (CE) Ho Iat Seng, who had led a delegation to the city for four days.
The agreements were signed between the CE and Gong Zheng, the mayor of Shanghai, at the first Shanghai-Macau Cooperation Conference
The signed agreements included: a framework agreement regarding strengthening the exchange and cooperation on key areas of the online new economy, smart city matters, and small and medium-sized enterprises; a letter of intent on initiating Shanghai and Macau exchange and cooperation on cultural affairs and tourism; and an agreement on sports cooperation.
The two officials also signed a letter of intent on cooperation in meetings, incentives, conferences, and exhibitions (MICE) business; and a framework agreement between the Shanghai Institutes for International Studies and the University of Macau, on academic exchange and cooperation.
The CE stated that Macau and Shanghai enjoyed “good prospects for wide cooperation in fields such as financial services, traditional Chinese medicine, and scientific and technological innovation.”
He also talked about Macau aiming to develop modern financial services.
These included fostering training for financial professionals; promoting a presence in Macau of Shanghai financial institutions; encouraging Shanghai enterprises to issue bonds in Macau; and bolstering exchanges between financial-service providers in the two cities.
The CE suggested that Macau and Shanghai could step up efforts to promote high-quality development of traditional Chinese medicine. Macau’s position as a “bridgehead” would help introduce quality Chinese medicine products from the Mainland to Portuguese-speaking countries, and the European Union, as well as countries and regions covered by the “Belt and Road” initiative, he said.
Ho, who led the Macau delegation, arrived in Shanghai on June 3. LV

Chief Executive (CE) Ho Iat Seng exchanged views with the president of Fudan University, Xu Ningsheng, on how to step up Macau’s talent cultivation effort, and bolster exchange between tertiary education institutions in Macau and Shanghai.
The meeting was held in Shanghai during the CE’s four-day visit to the metropolitan city.
As cited in a statement, Fudan University has seen a growing number of Macau student registrations, with around 140 this year , said Xu.
Noting the number of Macau students currently studying at Fudan University, Ho said he hoped the university would continue to support Macau in nurturing a greater number of talented individuals for the purposes of Macau’s economic development.
The president of Fudan University said during the meeting that Macau played a significant role in national development – in terms of being positioned as a key city within the Guangdong-Hong Kong-Macao Greater Bay Area initiative, and as a platform in the “dual-circulation” development pattern for the country’s economy.
As a conclusion of the meeting, Fudan University and the Macau SAR Government would strengthen cooperation in healthcare, socio-economic development, and cultural exchange, he added. LV