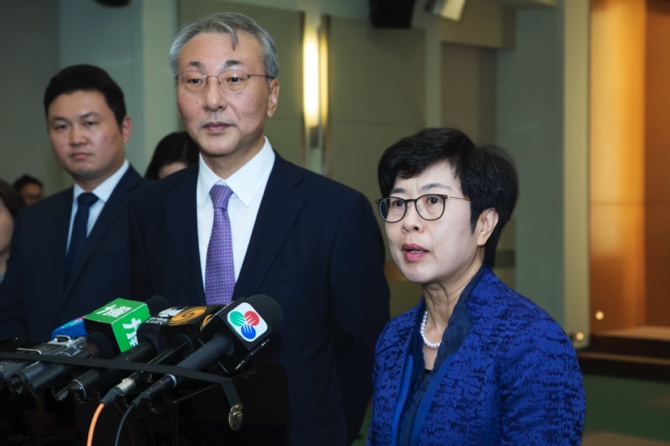 Two agreements with regard to judicial cooperation and the handling of fugitives were signed yesterday between Macau Special Administrative Region and the Republic of Korea.

The signing ceremony was held at Government Headquarters yesterday afternoon. Secretary for Administration and Justice, Sonia Chan, and the consul-general of South Korea in Hong Kong, Kim Weon-Jin, signed on behalf of their respective jurisdictions.

The two agreements are officially known as the Agreement for the Surrender of Fugitive Offenders and the Agreement Concerning Mutual Legal Assistance in Criminal Matters.

They were signed to provide a legal framework for the two jurisdictions to conduct legal and judicial communications and exchanges. It is hoped that the enactment of both agreements will have a positive impact on the prevention and combat of cross-border crimes.

The Macau SAR government remarked that the surrender of fugitives and offenders has been an effective way to fight crime. The agreements also symbolize the enhancement of judicial cooperation with countries along the “Belt and Road.”

After the signing ceremony, the secretary described the agreements as “beneficial to handling future cases or legal issues, while at the same time be able to guarantee the realization of justice in each of the two jurisdictions.”

Chan also said, “the concerned agreements are the fruits of years of negotiation. They were also realized against the backdrop of the continuous development of diplomatic relations between the People’s Republic of China and the Republic of Korea.”

Chan explained that the content of the agreements was stipulated following a set of formats and requirements which had been approved by the Central People’s Government. Minor differences may exist by request and agreement by both signatories.

The two agreements will be enacted 30 days after the completion of the required internal procedures.

The Macau SAR recently signed similar agreements with the Republic of Portugal and Mongolia. AL