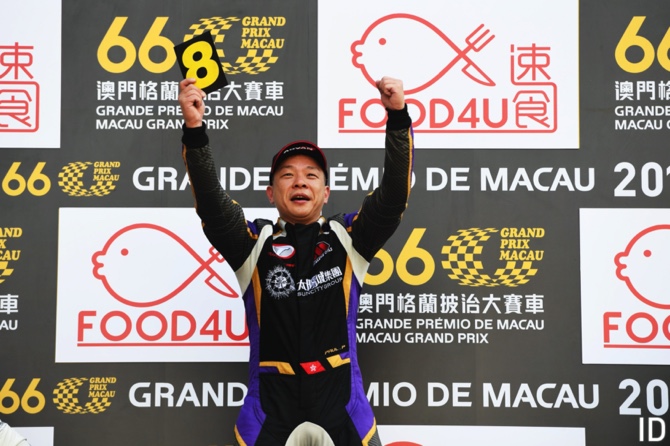 In a race with a few incidents and laps behind the safety car, Poon and fellow Hong Kong driver Alexander Fung made it a 1-2 finish for Hong Kong and the Suncity Racing Team, taking their Peugeot RCZ to the first and second place of the podium.

Crossing the line behind them in the same racing class and in the third position was Macau driver Chan Weng Tong in a Chevrolet Cruze.

In the other class races which were held concurrently – the over 1950cc – the winner was Macanese Filipe Souza in an Audi RS3 TCR, followed by Kevin Leong and Luciano Castilho Lameiras, both in the Mitsubishi Lancer Evolution 9.

It was a race where drivers were in positions granted in the qualifying session. Trying to avoid unnecessary contacts that could jeopardize their race, Poon was only briefly challenged by his teammate Fung before he took advantage of the open track to gain a two-second advantage.

After four laps behind the safety car, de Souza attempted to pass Fung but without success.

After another safety car and with only two laps remaining, de Souza tried to pass Fung one more time but was unsuccessful.

There was no more time to race as a new safety car was deployed after Lui Man Kit stopped his Mini Cooper S at Moorish Hill on the last lap, leading to a slow speed crossing the line and an easy win for Poon, who took both the overall and the 1.6T class wins.