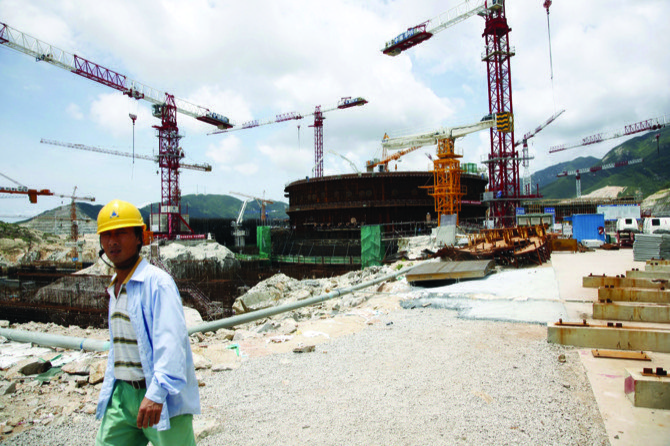 China’s homegrown nuclear technology is gaining favor in the battle for the nation’s next generation of reactors, according to a state-owned developer, as it seeks to move on after delays and cost blowouts from imported designs.

China’s reactor, known as the Hualong One, will be faster and easier to repair and maintain than competing foreign designs because it will be made domestically, according to Chen Hua, chief executive officer of China National Nuclear Power Co., which builds and operates nuclear power projects in the country.

“We prefer the Hualong One,” Chen said in an interview Monday on the sidelines of a nuclear conference in Beijing.

The global nuclear industry has been awaiting a revival in China after cost overruns and stricter regulation after the 2011 Fukushima disaster in Japan stalled approvals and construction of new units. The country’s expanding energy demand growth and drive for cleaner energy have been a magnet for Western reactor makers, including Westinghouse Electric Co. from the U.S. and France’s Electricite de France SA.

Their marquee third-generation reactors – the AP1000 and EPR, respectively – started commercial operations in China in recent months. However they face competition domestically, as state-run China National Nuclear Corp., the parent of CNNP, and China General Nuclear Power Corp. promote the production and export of Hualong One.

CNNP operates the Sanmen project in Zhejiang province, which uses Westinghouse’s AP1000 design. After starting commercial operations at the No. 2 reactor in November, it has since been suspended after a problem with its coolant pump was detected near the end of last year.

Westinghouse is currently examining the defect at Sanmen No. 2 and will be responsible for the cost of fixing it as the unit is still under warranty, Chen said, adding that repairs may take as long as eight months. A China-based Westinghouse spokesman declined to comment, and representatives in the U.S. didn’t respond to requests for comment Monday.

Curtiss-Wright Corp., the U.S. company that made the pump, is working with Westinghouse to determine the cause of the problem. Its liability, “if any, is limited to the cost of repairing a part,” up to the cost of replacing the entire pump, according to a statement Monday. There are 12 other pumps in operation at three other AP1000 reactors in China.

The race to build more reactors in China may intensify as it ended a three-year freeze on reactor approvals this year, clearing the construction of four Hualong One units. The decision was seen as an indication of China’s future preference, BloombergNEF analyst Hanyang Wei said.

China is expected to build more than 30 Hualong One nuclear reactors based on project approvals and development plans, Hualong International Nuclear Power Technology Corp. Deputy General Manager Xian Chunyu said at a conference in Beijing on Tuesday, without specifying a time frame. The nation may approve as many as 10 nuclear units this year, none of which will be AP1000s, according to the China Nuclear Energy Association.

“The AP1000 is dead in China, and it may very well be dead all over the world,’’ Chris Gadomski, lead nuclear analyst for BloombergNEF, said in an interview. “I don’t know who would place an order for a new AP1000.’’

Chen said third-generation designs are similar in costs, but ultimately the choice will boil down to which technology has a better support system and see costs fall the fastest.

That’s not to say the AP1000 is completely out of the race, according to Chen, who said the company may still use it in future reactors. He called the technology an “advanced idea” and forecast it may take another eight years for it to reach commercial scale. China is also developing an upgraded version, called the CAP1400.

“It’s like a really good car, super advanced, but what happens if you don’t have enough spare parts,” Chen said. “So you might prefer something more mature. If there are any issues, you’re able to fix it.”

EDF said yesterday it’s in discussions with China about the potential for more EPR reactors in the country. The French nuclear giant partnered with CGN to build Taishan No. 1 and 2 in Guangdong province, and sees “room” for EPR development in China and at Taishan.

“Sites for nuclear are getting scarce so it’s good to consider high capacity power plants,” Fabrice Fourcade, chairman of EDF China, said in an interview. “At the moment the only one available before CAP1400 comes into operation is EPR.” Bloomberg