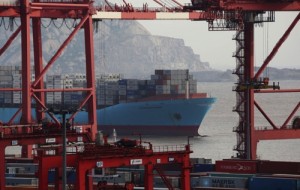 China’s exports grew more than forecast in August while imports shrank unexpectedly for the second month in a row, a reminder of the fragile recovery in the world’s No. 2 economy, customs data showed Monday.
Exports rose 9.4 percent last month, down from a 14.5 percent expansion in July but higher than many economists had been forecasting.
Imports, however, contracted 2.4 percent, after shrinking 1.6 percent the month before, at odds with the expectations of economists, who though imports would return to growth last month.
The figures indicate that global demand for China’s manufactured goods is holding up but domestic demand continues to stumble, exacerbated by a slump in the property market.
“While some of this weakness is because of falling prices of imports, especially of raw commodity imports, the momentum of imports is also weak in real terms. This reflects sluggish domestic demand,” especially in industries such as real estate, said Louis Kuijs, chief China economist at RBS.
China’s communist leaders are relying on exports to help support employment while trying to nurture growth based on domestic consumption.
Policymakers in Beijing rolled out mini-stimulus measures earlier this year after economic growth in the first three months sagged to 7.4 percent, the lowest in nearly two years. Growth improved only slightly to 7.5 percent in the second quarter.
Kuijs said that growth would not strengthen for the rest of the year as the ailing property market is weighing on the economy. He expects authorities to unveil “increasingly significant measures” to support growth.
August’s exports totaled USD208 billion while imports were $158.6 billion, pushing China’s politically sensitive global trade surplus up nearly 78 percent to an all-time high of $49.8 billion.
Economists said that the continuing export strength and import weakness would put pressure on China’s currency, the yuan, to strengthen further against the dollar. AP