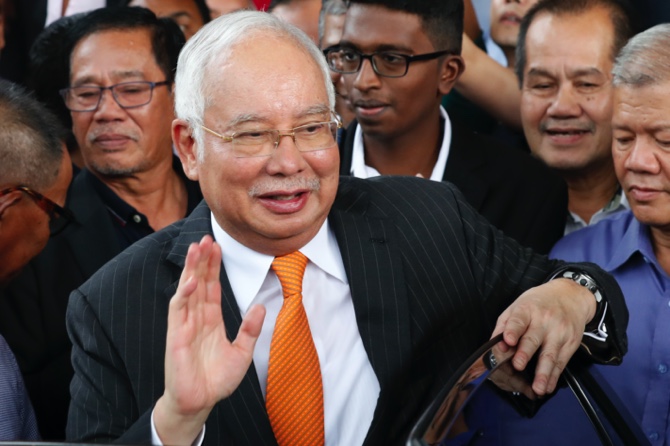 Najib, 66, faces multiple corruption charges linked to the looting of the 1MDB fund, a scandal that contributed to his election defeat last year.

Prosecutor Gopal Sri Ram said Najib was the “supreme power” in 1MDB and had sought to cover up his tracks when the scandal first broke out in public in mid-2015. Sri Ram said his team will show how Najib had abused his power to alter or remove material information from the Auditor-General’s report on 1MDB before it was presented to the Public Accounts Committee in parliament.

Sri Ram said the meddling was to cover up the extent of his role and that of fugitive Malaysian financier Low Taek Jho, better known as Jho Low, in the affairs of the fund. He described Low as Najib’s “mirror image or alter ego.”

“There were passages in the report that caused concern to Najib, though they were true in fact. He became non-plussed, if not agitated. He took positive steps to have these passengers altered or removed,” Sri Ram said in is opening remarks.

He said Najib knew “if the truth emerged, he would be exposed to civil and criminal liabilities.”

Najib denies any wrongdoing and accuses Malaysia’s new government of seeking political vengeance. The former leader, whose father and uncles were the country’s second and third prime ministers respectively, could face years in prison if convicted.

His lawyers say he was misled by rogue bankers led by Jho Low, identified by the United States as the mastermind behind the scandal and wanted in both countries.

Najib is being jointly tried with Arul Kanda Kandasamy, 1MDB ex-CEO, who is accused of abetting him. Yesterday’s trial opened just days after another court ordered Najib to enter his defense in his first corruption case linked to money entering his account from a former 1MDB unit.

In all, Najib faces 42 charges of criminal breach of trust, graft, abuse of power and money laundering in five criminal cases over 1MDB corruption that led to investigations in the U.S. and several countries. His wife and stepson, several officials from his government, and the U.S. firm Goldman Sachs also face charges related to the scandal.

U.S. investigators say at least $4.5 billion was stolen from 1MDB by Najib’s associates and laundered through layers of bank accounts in the U.S. and other countries to finance Hollywood films and buy hotels, a luxury yacht, art works, jewelry and other extravagances. More than $700 million from the fund allegedly landed in Najib’s bank account.

Prosecutors earlier made slight amendments to the charge against Najib and Arul Kanda, adding specific passages in the audit report that were doctored.

Najib’s lawyer Muhammad Shafee Abdullah appealed for more time, saying the defense team faces “three battle fronts and it is worse than Waterloo.” But the judge ordered the trial to proceed.

Sri Ram said prosecutors will at a later stage summon Arul Kanda as a prosecution witness. Arul Kanda’s lawyer, N. Sivananthan, expressed surprise, saying his client can’t give evidence against himself and that he will object at the time. AP