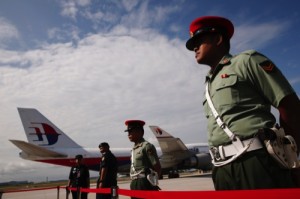 Malaysia aims to send a search team to the crash site in Ukraine of Malaysia Airlines Flight 17 before winter sets in to gather physical evidence to prove that it was shot down, Prime Minister Najib Razak said Saturday.
Najib said the government has “pretty conclusive” intelligence reports about what happened to the jet carrying 298 people but evidence must be collected so that its downing can be proved beyond a doubt if the case goes to court.
“That’s why we are very, very keen to re-enter the crash site before winter sets in. We need at least a few weeks not only to search for the body parts of victims but to assemble physical evidence,” Najib said at a joint press conference with visiting Australian Prime Minister Tony Abbott.
“Once that process is completed, we will look at the criminal side, who is responsible for this atrocious crime,” Najib said.
The plane plunged from the sky on July 17, killing all on board, while flying from Amsterdam to Kuala Lumpur over an area of eastern Ukraine controlled by pro-Russia separatists. Searches of the crash site were halted Aug. 6 due to concerns that fighting in the immediate area was a threat.
Pro-Russian rebels in Ukraine have publicly denied responsibility for shooting down the craft, but one top rebel has told The Associated Press they were involved.
Victims came from 10 different nations. Most of them were Dutch, but there were also a number of Malaysians and Australians. Remains of many, but probably not all, victims were gathered in the days after the crash and flown to the Netherlands for identification. The remains of 183 people have been identified so far.
The Netherlands is coordinating criminal investigations into the disaster by multiple countries, including the Netherlands, Ukraine, Malaysia, Australia, and Belgium.
Dutch authorities have said they will publish a preliminary report into the disaster tomorrow. The report will set out what investigators believe happened, but will not apportion blame. AP