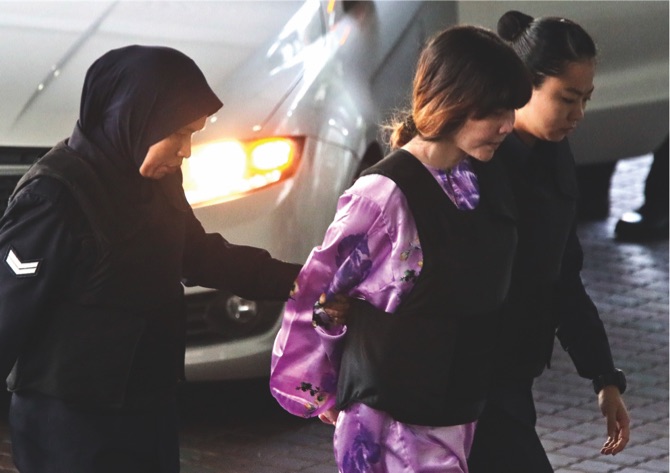 Vietnamese Doan Thi Huong (center) is escorted by police as she arrives for a court hearing at Shah Alam court house in Shah Alam, outside Kuala Lumpur

Malaysian prosecutors said yesterday that they would present security camera video showing two more male suspects at the airport on the day the estranged half brother of North Korea’s leader was killed.

Video presented in court earlier showed Vietnamese suspect Doan Thi Huong walking in the airport with a man wearing a baseball cap. Separately, Indonesian defendant Siti Aisyah was seen meeting with another man, who also wore a cap, at an airport cafe just before the attack on Kim Jong Nam was carried out in a crowded departure terminal of the Kuala Lumpur airport on Feb. 13. The faces of the men can’t be seen clearly.

A police witness has testified that the two men were among four— all believed to be North Koreans — who are still at large. Prosecutors accuse the four of intending along with the two young women to kill Kim.

Prosecutor Iskandar Ahmad told reporters that he would show security video of the other two men today. He said their absence from the trial would not weaken the prosecution’s case.

Chief police investigating officer Wan Azirul Nizam Che Wan Aziz earlier identified the two men seen with the women as only “Mr. Y” and “Mr. Chang.” He has told the court that the two men were believed to have put liquid on the women’s hands before they smeared it on Kim’s face.

He named the two other at-large suspects as “James,” the suspected recruiter of Aisyah, and “Hanamori,” who is nicknamed “Grandpa” or “Uncle” and is suspected of giving directions to Mr. Y. No further details about those four suspects were disclosed in open court, but prosecutors and the defense team say more details about them will come out before the trial is over.

Yesterday’s session was cut short because a defense lawyer was not feeling well.

Huong and Aisyah are the only two suspects detained in the brazen assassination of Kim, an outcast from North Korea’s ruling family who lived abroad in virtual exile for years. Both women pleaded not guilty at the start of their trial on Oct. 2 to murder charges that carry mandatory death sentences if they are convicted.

Their defense lawyers have said Huong and Aisyah were duped by the suspected North Korean agents into believing they were playing a harmless prank for a TV show. Prosecutors contend the women’s conduct showed they knew they were handling poison.

Aisyah’s lawyer, Gooi Soon Seng, told reporters before the trial that she was recruited in early January by a North Korean man known to her only as James to star in what he said were video prank shows. The lawyer said James and Aisyah went to malls, hotels and airports, where she would rub oil or pepper sauce on strangers. James video-recorded the encounters on his phone, and paid Aisyah between USD100 and $200 for each one. AP