Maradona slaps reporter on the face 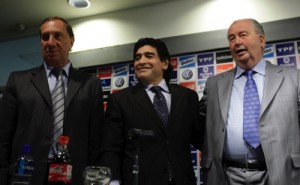 Former Argentine great Diego Maradona slapped a reporter on the face after attending an event with his family this weekend.
The former Argentine great also called the journalist an idiot during the confrontation outside a theater in Buenos Aires.
It wasn’t clear why Maradona was upset, though local media said the discussion appeared to be related to his former wife.
Video images showed the former player leaving his car and telling the reporter not to mess with him just before slapping him with his right hand. The journalist did not immediately react.
Fans and reporters had surrounded Maradona’s car to talk to the former star, who answered a few questions and was about to leave when he became upset.
Maradona’s son and his ex-wife were with him inside the vehicle. AP