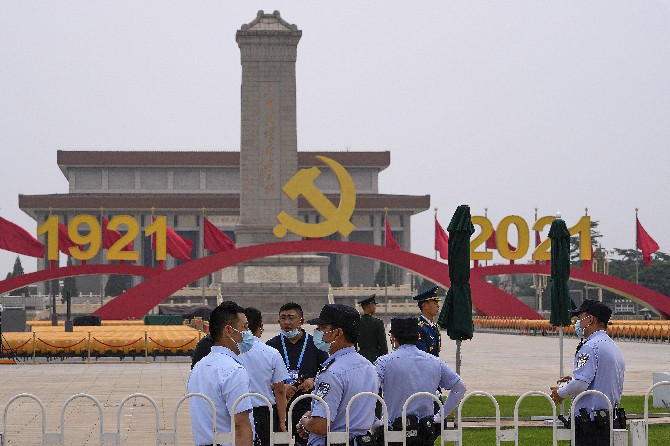 China is marking the centenary of its ruling Communist Party this week by heralding what it says is its growing influence abroad, along with success in battling corruption at home.
Party officials on yesterday heaped praise on President Xi Jinping, who has established himself as China’s most powerful leader since Mao Zedong, and has eliminated any limits on his term in office.
China has seen huge improvements in living standards over the past four decades, accompanied by rising international economic and political heft.
Yet, while many countries have benefited from that relationship, China is also seen eroding democracy and human rights in nations over which it holds economic sway.
“The Chinese Communist Party’s international influence, appeal and attraction have continually increased, placing it at the forefront of world politics,” Guo Yezhou, deputy head of the party’s external liaison department told reporters at a news conference held at the opening of a media center for the centenary celebrations.
With 92 million members and a solid lock on power at home, the party has sought to expand its control over Chinese who have moved abroad for study, business or other reasons. That has created multiple sources of friction, particularly in Australia, where Chinese students are prominent on university campuses, as well as in the U.S., the U.K. and other Western democracies.
Those nations are tightly interlocked with the Chinese economy, while standing at odds with Beijing’s authoritarian political ideology and its policies toward Hong Kong, Xinjiang and Tibet.
Guo made no reference to such concerns, saying the party’s outreach was a key component of China’s foreign policy.
“This outpoints the party’s strategic function,” Guo said.
Xi has made fighting corruption — and ensuring political loyalty — a hallmark of his nine years in office. Nearly 800,000 officials have been investigated for malfeasance under Xi’s rule, including 392 at or above provincial or ministerial level, said Xiao Pei, deputy head of the party’s corruption watchdog body, the Central Commission for Disciplinary Inspection.
“The struggle against corruption has attained total success and been deeply ingrained,” Xiao said at yesterday’s news conference.
Among those attending commemorative events is Hong Kong’s leader Carrie Lam, who has been leading a crackdown on opposition figures that has drawn strong criticism and legal sanctions from the U.S., Canada and the European Union.
Lam and the central government in Beijing have dismissed those measures as interference in China’s internal affairs.
Xi is scheduled to confer medals and speak at an award ceremony for party heroes Tuesday, as well as presiding over Thursday’s centenary celebration at Tiananmen Square in the center of Beijing. In his public addresses, Xi has reinforced the party’s goal of achieving “national rejuvenation,” more than 70 years after it took power amid civil war.
That includes bringing the self-governing island democracy of Taiwan under China’s control, raising the prospect of a regional war that would likely draw in the U.S. and its allies. Under Xi, China has also built up its military presence in the South China Sea and engaged in skirmishes with the Indian military along their disputed border.
A fireworks display at the Olympic stadium known as the Bird’s Nest is planned for Monday as well as a range of celebratory events across the country. MDT/AP