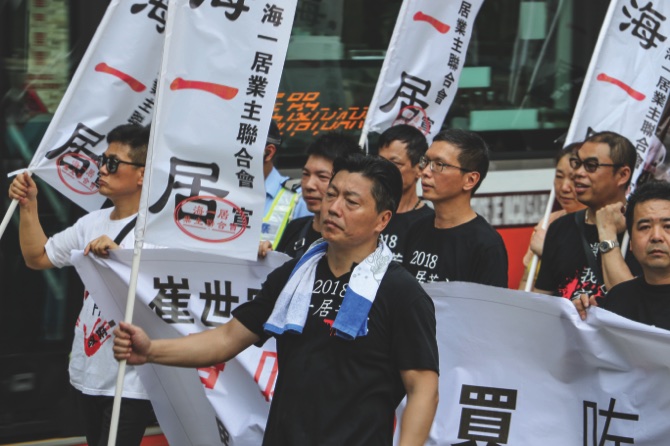 The demonstrations that took place on May 1 (Labor Day) this year were dominated by protesters demanding solutions from the government on non-labor related issues. The majority of those taking to the streets to voice their concerns were doing so regarding the “Pearl Horizon” case.

According to the Public Security Police Force (PSP) there were, in the several demonstrations, a total of around 2,600 people. The PSP noted that the protests went off without disturbance or any problems being registered.

A group of Pearl Horizon project homeowners accounted for a significant number of those participating in the protest. They took this opportunity to once more express their discontent for the non-resolution of the case.

Speaking to TDM, the leader of the demonstrating group and head of the Pearl Horizon Condominium Owners United Association, Kou Meng Pok said that the decision to march on May 1 had nothing to do with the upcoming visit of the chairman of the Standing Committee of National People’s Congress, Zhang Dejiang, to Macau.

“Let’s say, Zhang’s visit is separate from our demands. I was told that we should take some action during his visit, but we think it’s unnecessary,” he said, adding, “we should exercise caution when Chinese leaders are in town. Sometimes you just have to give it some time and patience.”

Another group protesting on the day was the one from the Macau Family Reunion Association that continued to urge the government to address their demands of granting MSAR citizenship to their major descendants.

In small number, groups of workers also took the opportunity to continue to petition for policies that further restricted the hiring of imported labor as a way to protect resident workers’ jobs, which they think are being threatened by the imported workers.

This year, the traditional “May Day” demonstration gathered less participants and many of the associations and groups that usually take the streets on the day to voice  their demands were absent. Protests were centered on the Pearl Horizon case, which is not linked to the demands that are usually voiced on Labor Day.

According to sociologist Larry So, “the Pearl Horizon topic is of a major concern, especially for the [home] owners but at the same time, and due to the recent issue regarding the public housing that involves at least 61 families [which risk to lose the house they bought] by a contract cancellation from the government. And this kind of affects people and there is a sense that if they pressure harder the government will do something,” he noted saying that this affinity with the topic might lead more people to join in this kind of event.

“On top of that May 1 is known to be a day where associations and groups can demonstrate and show their force [strength] so it is common that they will join together to look larger to pressure the government to solve the problem,” So told the Times, adding that the lack of groups protesting on direct labor issues might have to do with the fact that, “employment rate is very good and I would risk to say that people do not consider this a primary problem in Macau society.” Still according to So, the only remaining issue to be addressed is related to “the foreigner workers that are feared to be occupying the jobs of locals.” He thinks that this is the only labor issue and that it is only drawing the attention of some people.

So also mentioned that, apart from all these issues, “the pan-democratic side seems to be facing an internal conflict. They do have issues they need to resolve internally before they launch any kind of campaign. Seems like the young generations and the older ones are not looking each other in the eyes and in term way they do not have a united position that they can take outside.” So also added, “Trade Unions [that could have interests on the matter] since day one showed they have no interest in marching in the streets and they are more interested in carnivals and other kind of events,” the sociologist concluded.

On the side of the pan-democrats, Scott Chiang, president of the New Macau Association (ANM), told the Times that he understands the trouble of the Pearl Horizon buyers and that he can understand why they are protesting and acknowledged their right to do it. He qualified his understanding by saying that the topic is already a bit wasted and that potential solutions had already been mentioned for the case.

“Of course I feel sympathy for them as they put their money on something and they feel to have been deceived. But I think they should keep their options open [regarding getting a monetary compensation] since it may be too optimistic to think they will get a house [unit],” Chiang said. “I think that’s the only problem we should be talking about,” remarking, “we should talk more on labor rights and working conditions but I guess we are in 2017 [election year] so I guess everybody is a little concerned in deciding what to do.”

Regarding the ANM, Chiang said, “it was historic that New Macau didn’t participate although we did deliver a list of problems we detected and want to see solved regarding labor rights.”

The president of Macau Civil Servants Association (ATFPM), Pereira Coutinho, also did not participate in the demonstrations – in lieu Coutinho said the association has chosen to spend the day in activities with its members and listening to their concerns. “For us, all days are worker’s days and we had the opportunity recently to voice out our concerns regarding the hike on several fees,” he said.