Mayweather: Fans will have to decide if fight worth USD99.95 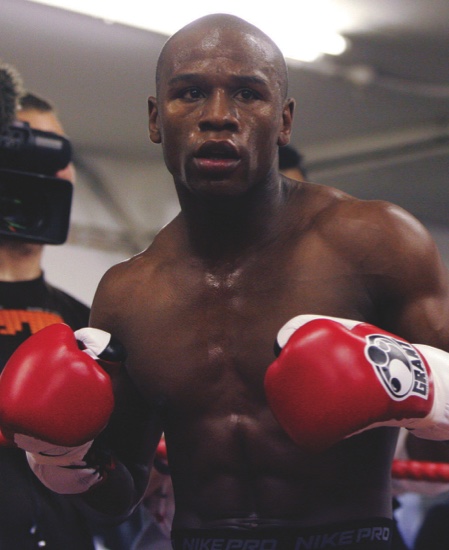 Floyd Mayweather Jr. says fans will have to decide for themselves whether it’s worth USD99.95 to pay to watch his fight with Manny Pacquiao at home.
Personally, though, he believes the richest fight in boxing history will be must see TV.
“From the matchup it seems like an exciting fight,” Mayweather said yesterday. “When I mentally picture the fight, to me it looks like it’s going to be a very exciting fight.”
Mayweather, who could make USD180 million for the May 2 bout, said he doesn’t think the fight is overhyped, mostly because it’s a matchup fans have waited five years to see. Even if it isn’t the so-called Fight of the Century, he said, it will likely go down as one of the biggest fights ever.
“I can’t really say it’s hype because this is real life,” Mayweather said. “You’ve got two future hall of famers in a megafight.”
Mayweather said no one is forced to buy his fights, and that he won’t change his style in any fight just to please the fans. Unbeaten in 47 fights as a pro, his biggest goal is to remain that way.
“I’m just thankful and I’m appreciative of whoever has bought pay-per-view, whether they were pleased or they weren’t pleased,” he said. “When it’s all said and done, when the book is written, they’re not going to say he was a defensive wizard. They’re going to say Floyd Mayweather was a winner.”
Less than three weeks before the two greats meet for the welterweight title, Mayweather took some time off from training for a media day outside the gym he owns near the Las Vegas Strip. He arrived more than 90 minutes late, but seemed eager to keep answering questions even as a desert windstorm threatened to undo the tent in the parking lot set up for his impromptu news conference.
“There’s no storm coming,” he said at one point.
Mayweather said he is treating Pacquiao as just another opponent, even as he acknowledged the awkward lefty poses some problems in the ring. The difference, he said, is that he will be able to adapt to Pacquiao’s style as the fight goes on.
“We’ll see what he brings to the table,” Mayweather said. “Our styles are totally different. I fight with smarts. Every move is calculated. Every move is thought out. I’m always 5-10 steps ahead of my opponent.”
By contrast, Mayweather said Pacquiao fights the same way every fight.
“I don’t know if he can make adjustments,” he said. “I’m able to make adjustments. He comes at different angles so we’ll have to see. But he’s facing a solid, strong welterweight.”
Mayweather said Pacquiao may have been surprised last month at the Los Angeles news conference announcing the fight that he looked to be the much smaller fighter when the two stood together. That, he said, was even though Pacquiao was cheating a bit for the cameras.
“He wears the lifts in the shoes,” Mayweather said. “I know all the secrets he does.”
Mayweather said he wasn’t sure how the fight would play out in the opening rounds, though the consensus among most in boxing is that Pacquiao would try to land big punches early. Pacquiao’s trainer, Freddie Roach, has said the goal is to make Mayweather work every second of every round and not be able to take any time off.
Mayweather’s manager and confidante, Leonard Ellerbe, was more specific, saying Mayweather is looking to make a career-defining statement against Pacquiao. Mayweather will still use all his defensive skills, Ellerbe said, but won’t be afraid to attack Pacquiao from the opening bell.
‘Floyd Mayweather is going to try to take Manny Pacquiao’s head off,” Ellerbe said. “You can count on that happening, too. Floyd Mayweather is looking to finish him off.” AP