McDonald’s sales slump worst since 2003 due to supplier scandal 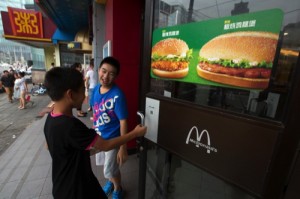 Boys open the door to a McDonald’s restaurant in Beijing

McDonald’s, the world’s largest restaurant chain, posted the worst same-store sales decline in more than a decade, hurt by sluggish demand in the U.S. and a health scare involving a Chinese supplier.
Sales at stores open at least 13 months fell 3.7 percent in August, the Oak Brook, Illinois-based company said in a statement yesterday. Analysts estimated a 3.1 percent drop. McDonald’s also said that supplier problems in China will reduce third-quarter earnings per share by 15 cents to 20 cents.
McDonald’s Corp. said earlier this month that it will monitor its suppliers in China more closely after a food-safety scandal in the country hurt its sales and reputation. The announcement came after a TV report in July showed workers at McDonald’s supplier Shanghai Husi Food Co. — a division of OSI Group Inc. — repacking expired meat. McDonald’s stopped using the plant in Shanghai.
The company plans to increase audits and video monitoring at its suppliers and send more employees to meat production facilities to ensure its food is prepared safely. It has also named a new food safety officer and created a hotline where employees can report poor food safety practices.
McDonald’s is not the only fast-food company to be hurt by food-safety concerns in China. Yum Brands Inc., whose brands include KFC and Pizza Hut, has also stopped using meat from the Shanghai plant and said that its restaurants cut all ties with OSI in China, the U.S. and Australia.
“There isn’t a lot of good news here,” Peter Saleh, a New York-based analyst at Telsey Advisory Group, said in an interview. “China is going to be under pressure for a while; their traffic is down in the U.S.” Leslie Patton, Bloomberg/AP