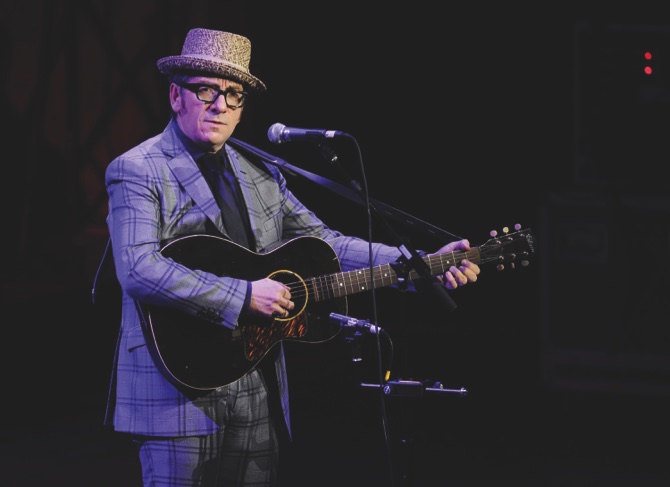 English musician and singer-songwriter Elvis Costello will be making his first appearance in Macau next month, marking a new foray into the Asian continent – where he has rarely performed before.
Costello, who was ranked by Rolling Stone magazine in 2004 as one of the 100 Greatest Artist of All Time, will perform at the Macau Cultural Centre on September 9, shortly after he plays three concerts in Japan – a country that Costello says is the origin of his earliest Asian fan base. Following this, he will head to Singapore and then Taipei for his final Asia concerts for 2016.
In an exclusive interview with the Times, Costello said that he is planning to perform a combination of his most well-­known songs and possibly some newer hits in his Macau debut, but will not be featuring a return of his game show-style “spin wheel” that he has used on previous occasions to generate a spontaneous and somewhat unique set list. Costello hinted that it might just be too much chance-­based entertainment for a city built on gambling, and could invite “due questions” from local authorities. However, the singer-­songwriter also suggested he might return for a month-long residency at one of the city’s resorts.
The renowned artist sat down with the Times to talk about Macau, the music industry, and how and why he writes the lyric-intensive, meaningful songs that he does. 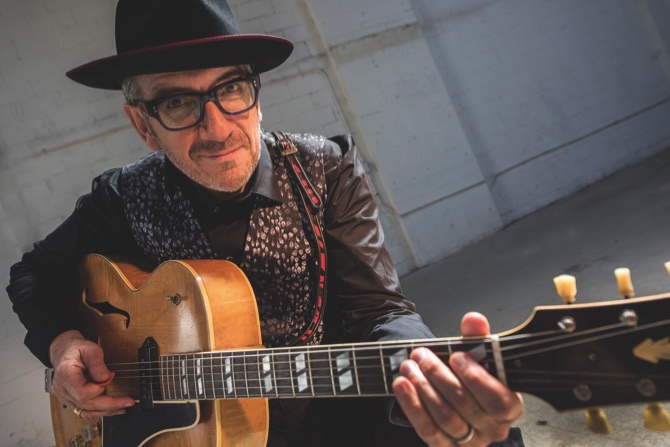 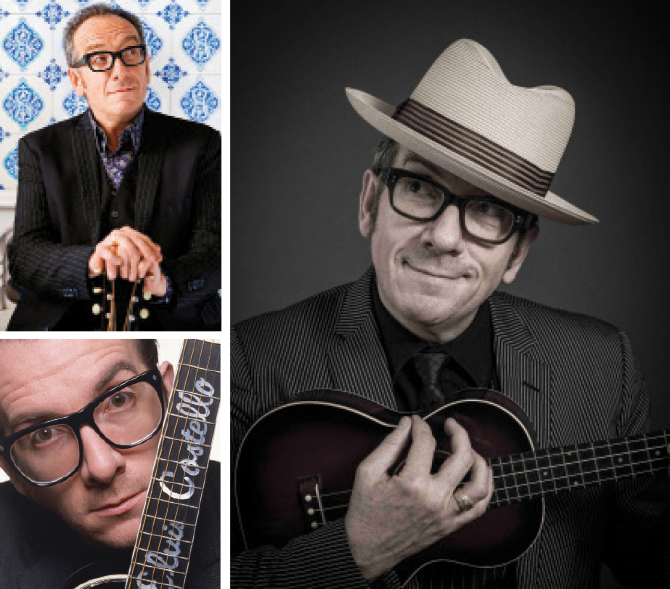 Macau Daily Times (MDT) – What are your impressions of Macau? Have you visited or performed here before or elsewhere nearby?
Elvis Costello (EC) – I haven’t been to Macau before, but I have been to Hong Kong to perform on one occasion. Other than that I’ve not been in the area at all.
As for my impressions, I have only that which I’ve been told. So I can’t say that I’m an expert of any kind – I’m waiting to be educated, as it were. I’ve been told that the city is very bustling and that it has a lot of buildings. I expect that there’s a vibrant skyline.
I have played very few shows in Asia actually; I played in Singapore twice, I played in Hong Kong just once, and then a couple of times in Korea. My longest relationship [in Asia] has been with my audience in Japan. I have been traveling there for nearly 40 years, so that’s a very different matter.

MDT – Aside from entertainment, what do you hope that the audience in Macau takes away from the show?
EC – I think that this is a show in which storytelling of a kind in song  is very much to the fore. Some aspects of the song [will be] lost, allowing for the fact that people will in some cases be listening in a second language. I still think it’s very important to stick with what I’m doing and sing the strongest songs that are at my disposal. And I think the feeling of music can carry you through quite a long way. But I believe that people will take out [of the show] an accumulated story.
My shows are ones that are created night-to-night in a different way, depending on the songs I choose. If you come to two of my shows, you are unlikely to hear exactly the same songs in the same order.
You may hear some new tracks in the show [in Macau]. I will hopefully manage to play one or two news songs along with what I believe are the better-known songs – I really don’t know [which those are] now. I will try to play the best songs. That is the best thing that I can offer.
MDT- You have previously used a game show-­style “spin wheel” with the names of some of your most popular tracks written across it to determine which songs will be played at that particular concert. Will you be featuring a return of the wheel in Macau?
EC – No, I won’t be employing that on this occasion. I figure that when you play in cities where games of chance are their main industry, there is the potential for some due questions asked by the ‘house’, shall we say? I don’t think introducing a game of chance to the show will go down too well [in Macau]. We didn’t feature [that] show in Las Vegas when I was traveling with the spinning wheel.
I think maybe that’s something we can [trial], if we come back to Macau – for say a month – [and be based] in one of the Macau casinos. It’s a big wheel and it takes a long time to construct it and transport it. But if we played a residency in one of the casinos, then it could be done.

MDT – You have said in the past that some of your singles become country-­specific hits overseas. Are there any particular songs that are popular in the area or Asia writ large?
EC – Well, I think that my calling card for a lot of people in places where I didn’t have an initial popular success would be the song, “She”. There is no doubt that it is widely heard because [of its attachment] to a very successful movie. Sometimes I think people are a little surprised when they hear that the rest of my repertoire doesn’t resemble that song very much. But I’m hoping to convince them [audiences] that the other songs that I have are equally [valuable].

MDT – You have worked as a solo artist and as part of groups in the past. Can you describe the differences and whether working with other musicians can ever be creatively compromising?
EC – When I choose the songs to sing in concerts [that] I play alone, I often return to the first iterations of the songs – the way I imagined them when I first wrote them. So in many ways, they are performed as they originally were [meant to be] before I got involved recording them with a band.
With the benefit of hindsight, there are a couple of songs – and I am not going to tell you which ones those are – that I feel I kind of let get away a bit in the process of recording them in the studio. Maybe I [became] more focused on making the record than singing the songs. So it’s always good to get the opportunity to bring those songs back into focus.
I wouldn’t say it’s creatively compromising to work within a group; it’s just very different. I’ve been fortunate to front two or three very fine groups [… with very talented] musicians – some of which I have worked with for nearly 40 years. We wouldn’t be doing that if I didn’t think [highly of them].
But we are not the same people. It would be foolish not to take advantage of all the things you can learn in the time in between. In any line of work you should be looking to get better as you move along.
MDT – Are there any emerging artists that you are particularly fond of, or watching closely, and why?
EC – I used to say the names [of new artists that I admire], but then I began to feel it was a bit of a burden for them – to have to answer questions about the fact that I like them. What does it matter what I think?
If you look at the company I have been keeping, you have to assume that I wouldn’t share the same [stage] with people that I didn’t like and didn’t think highly of. Recently I played a show where we ended up with 19 people on the stage in what was supposed to be a solo concert! I am glad to call all of those people my friends to different degrees, and it is a pleasure to play with them.
MDT – What are your thoughts on the direction and the current state of the music industry and how is it affecting artists today, compared with in the past?
EC – When I started out in music, most artists were paid very poorly for their work… but somebody benefited from it. And that seems to [also] be the situation now. So what does that tell us?
The people who control the means to deliver music to the public will always be the ones who say that they take all of the risk, but they also take most of the profit. That hasn’t really changed, just the amount of money and the method [of generating it].
I think it must be very discouraging for young artists today, but it’s not something that I feel I need to be involved with right now. I can play the songs that I like [today] in front of a public, without having to put them [first] on a record.
Actually, I don’t have anything clever to say about it. I don’t have a special insight into it that nobody else has.
MDT – Why did you want to write your recently published autobiography/memoir, “Unfaithful Music & Disappearing Ink”? What do you want the readers to take away from it?
EC – As the title suggests, memory is not a permanent condition. So I thought it was best to get it on the page while [I can clearly recall it], in case there should ever come a time when I couldn’t remember it as clearly and I regretted not having [written it].
I’m astounded that anybody read it. You know, I can understand if you’re a book reviewer – you kind of have an obligation to at least pretend to have read it – but I have met many people who have clearly read it in quite a lot of detail.
I don’t know that there is one thing to take away from a book that’s 600 pages long. It quite surprised me […] that everyone takes a different thing out of it. That’s the pleasing thing. There isn’t one message as such; it isn’t a fairy tale with “and the moral of the story is…”
It’s a complicated non-linear book and I think some people have probably become exasperated with its [apparent lack of structure]. Its structure is unusual… you’ll have to take my word for it that it does have a structure… and one that was intended!