Medical tests at border may include Macau residents 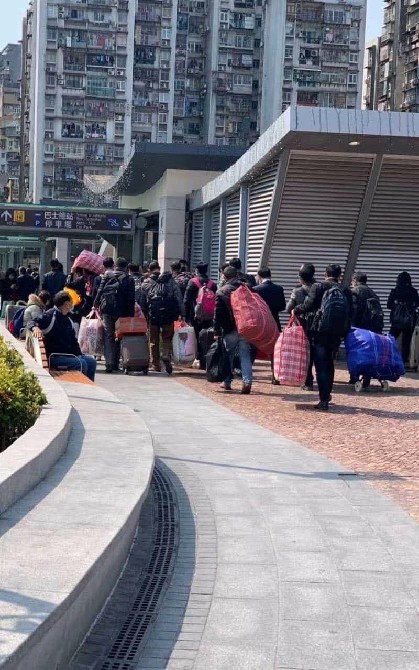 Workers arriving in Macau via the Border Gate (C.R.)

According to Lei, the potential decision on mandating local residents for a medical examination and test will be related to their traveling to mainland China.

The Public Security Force (PSP) reported a continuous increase of local residents traveling between Macau and Zhuhai. Last Thursday, all of the city’s immigration checkpoints recorded a total of over 35,000 crossings made by Macau local residents, representing a 66% increase compared to the previous day.

Currently, Macau local residents are not obliged to complete the upon-arrival-Macau medical examinations and tests. However, the health authority said that the local government has not ruled out the possibility of requiring all Macau residents to go through the tests if certain situations occur.

The local government will likely issue the request when a Macau local resident gets infected with Covid-19 because that person traveled to mainland China, and because Guangdong province is still a high-risk contagion area.

Particularly, Lei urged local residents to not travel frequently between Macau and Zhuhai if it is not necessary.

Besides mainland China, the local government is also highly concerned about other places which are high-risk contagion areas.

The SSM Director said that some countries, including Japan, Israel and Italy, may also be listed as high-risk contagion places.

While the epidemic situation continues developing in other regions, Macau is getting the city back on track. Starting on Monday, public services will resume on nearly full capacity and many other businesses will also allowed to reopen, including tutoring centers and entertainment clubs.

Questioned by the media whether the local government considers it proper to fully restart the city’s engine and gather people inside offices and other closed environments, Lei said that “it is not realistic to stop everything.”

Lei stated that Macau is currently in a moderate stage in terms of epidemic control and that it is necessary for the city to resume certain services, with workers still implementing measures to ensure safety while on-duty.

As to mainland China, Lei said that “infection numbers can’t be forged” while defending mainland China for releasing true figures of the country’s infection cases.

The company which had a deal with the local government to produce masks for Macau SAR has “gone missing.”

Previously, the local government said it had trusted a Macau local group to manufacture facemasks in mainland China to supply both Macau and other cities in the Greater Bay Area.

During Friday’s press conference, one member of the media asked about updated information on the production of facemasks.

“We have recently lost contact with the facemask company, we can’t find them either” Lei said.

On March 2, the local government will announce the fifth round of the facemask plan. Lei said that he cannot evaluate how much time Macau’s current facemask storage can supply the market.