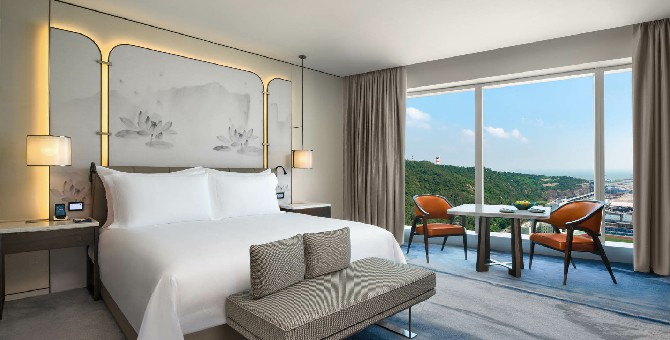 The reopening of the Nüwa hotel, which is currently undergoing refurbishment and is one of the four accommodations at the City of Dreams (CoD) casino resort on the Cotai Strip, has been postponed from the originally scheduled launch date of February 8.
“There are some ongoing renovation works still needing to be addressed,” a source from the Nüwa hotel, one of the staff responsible for Nüwa’s reservation service, told the Times.
The renovation has taken longer than expected as the hotel group “wants to deliver the best experiences to our customers,” the staff member added.
The tentative date for the room reservation service at the Nüwa hotel will be “likely to fall around the end of February,” said the staff member, adding that “the exact timeframe for that is still uncertain at the moment, since we [the reservation department] has not yet received any official confirmation on the reopening date.”
The notice stating that the Nüwa hotel would reopen on February 8, which was published weeks ago on the CoD’s official website, has been removed and replaced with “coming soon.”
The refurbishment of the Nüwa hotel commenced in early 2020, as stated in a memo released by Melco International Development Limited, which owns Melco Resorts & Entertainment Limited (Melco Resorts), the operator of CoD.
Since May, two Michelin-starred restaurants have been permanently closed by Melco Resorts, namely the two-Michelin star French restaurant The Tasting Room and one-Michelin star Japanese sushi restaurant Shinji by Kanesaka.
The conglomerate attributed the two shutdowns to remodeling works.
When asked about the possible reopening dates of the two restaurants, the staff said the date for the reinstatement of the Tasting Room is still unknown.
However, Shinji by Kanesaka will no longer operate and will be replaced by another Japanese restaurant brand in the future, according to the staff member.
According to the Nüwa hotel’s website, the hotel will offer around 300 accommodations, including 33 luxurious villas.
The original reopening date for the Nüwa hotel, on February 8 before the Spring Festival, coincides with that of the opening of the Londoner Macao, also perched on the Cotai Strip — which is a feature project of Sands China, one of Melco Resort’s key rivals in town.
On January 21, Sands China announced that the first phase of the Londoner Macao is slated to be launched on February 8.