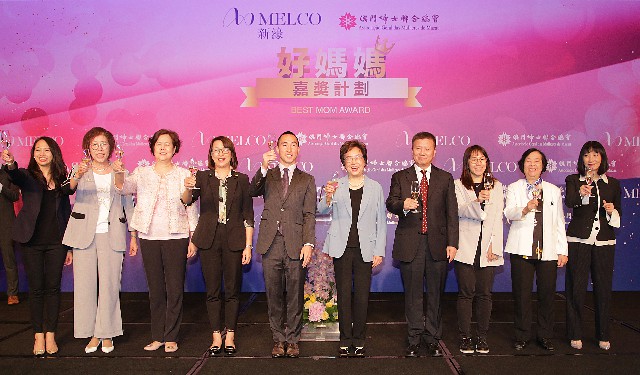 Melco Resorts & Entertainment Limited and the Women’s General Association of Macau co-hosted the Best Mom Award Ceremony at Melco’s City of Dreams property on Saturday.
The event celebrated women’s contributions to the world. It also celebrated the virtues of women, paid tribute to maternal love, promoted positive family values and provided the community with a platform to show their gratitude and appreciation, according to Melco.
The event was officiated by Lawrence Ho, chairman and CEO of Melco, and Ho Teng Iat, president of Women’s General Association of Macau.
Two rounds of selection were held prior to the ceremony on Saturday. Seventy winners were then chosen for the awards. Awards were categorized into “Best Mom Excellence Award,” “Runner-up Best Mom” and “Best Mom.”
There were eight “Best Mom Excellence Award” winners, 12 “Runner-up Best Moms” and 50 “Best Mom” prize winners.
The prize for each of the eight “Best Mom Excellence Award” winners was a trip to Beijing, accompanied by up to three family members.
Organizers thought it would be suitable, as this year is the 70th anniversary of the People’s Republic of China. The prize offers the winners a chance to experience the development attained by the mainland government.
The panel of judges for the event comprised Au Weng Chi, member of the Administrative Committee of the Macao Foundation; Un U Wa, vice president of Chinese Educators Association of Macau; and representatives from Melco and the Women’s Association.
Melco’s Lawrence Ho said, “The Melco message – ‘Best I Can Be’ – for initiatives for women encourages females to embrace life’s choices to bring out the best in oneself.”
The chairman stressed that his company was pleased to highlight the achievements of local moms through the Best Mom Award. It was exceptionally meaningful, according to the chairman, to make this ceremony a reality amidst the atmosphere of the double anniversaries of China and the Macau SAR.
Ho pledged that he and his company would continue to introduce more family and female-friendly activities and policies to Macau in collaboration with trusted local community partners, such as the Women’s Association.
Melco has been supportive of working mothers, with facilities installed in employee areas of Melco establishments to provide for women who are expressing with privacy and convenience.
Vice chairwoman of the 69-year-old Women’s General Association of Macau, Lau Kam Ling, said, “in recent years, the association has developed multiple services to support women and families. The Best Mom Award has been well-received by local families since it was announced in July, and on this special occasion, we extend our warmest gratitude and congratulations to the event’s winning moms who contribute so much to their families.”
According to Lau, the Women’s General Association of Macau has been devoted to women and children, and promoting positive family and social values.
Welcomed guests included officials from national and regional bodies, as well as representatives from the company and the association.
Meanwhile, according to data released by the Statistics and Census Service Bureau, there were 198,300 working women in Macau for the period of May to July this year, approximately 10,000 more than their male counterparts.