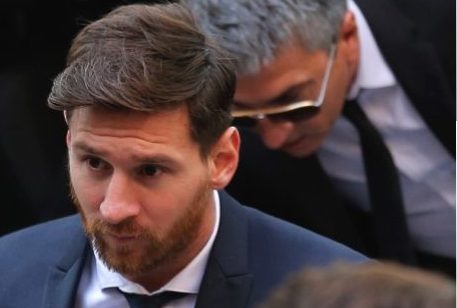 Lionel Messi denied having knowledge of the tax issues that led to fraud charges against him, saying yesterday he signed documents without reading them because he trusted his father and the advisers responsible for managing his finances.
“I didn’t know anything,” Messi said while testifying in his tax fraud trial. “I only worried about playing football.”
Wearing a dark suit and tie, Messi sat alongside his father in front of the judge and listened to other testimony for nearly four hours before being called to testify in the third day of the trial.
The Barcelona player looked impatient in court at times, looking down and trying to stretch his legs. The left foot that helps him thrive on the soccer fields kept bouncing impatiently underneath the chair.
Speaking for less than 15 minutes, he said he never suspected of any wrongdoing when his father would ask him to sign contracts or documents.
“I signed what he told me to sign because I trusted my father,” Messi said. “I trusted my father, and the lawyers said that I could (sign the documents).”
He said he didn’t know that part of his income was going through companies created in countries such as Uruguay, Switzerland and Belize, which authorities alleged was done to lower the player’s tax burden in Spain.
“The only thing I knew is that we signed deals with different sponsors and they paid for me to do advertisements, photos and things like that,” Messi said. “But I didn’t know how this money arrived or where it was going.”
Messi’s father, Jorge Horacio Messi, had reiterated in his testimony that his son didn’t know the details of his contracts or the structures created in other countries to handle his income from image rights.
“I didn’t think it was necessary to inform him of everything,” Messi’s father said.
Messi and his father are facing three counts of tax fraud and could be sentenced to nearly two years in prison if found guilty of defrauding Spain’s tax authority of 4.1 million euros (USD4.5 million) from 2007-09. They are not likely to face any jail time but could be fined and made to forfeit possible future tax benefits. Both deny wrongdoing, and the money owed was already paid back.
The trial is expected to end today, and the verdict and sentencing are expected next week.
Hundreds of journalists and a few onlookers were in front of the Barcelona court house when Messi and his father arrived. Authorities had prepared a special operation to control the crowd and protect the player. Some people showed their support to Argentina star, while a few yelled words against him, including asking him to “give the money back” and telling him to “go play in Panama.”
Messi was also being investigated by Spanish tax authorities after his name was among those released in the probe of international offshore accounts, known as the Panama Papers, although he was not charged for those allegations.
When the player left the court house, many fans applauded. Tales Azzoni, AP