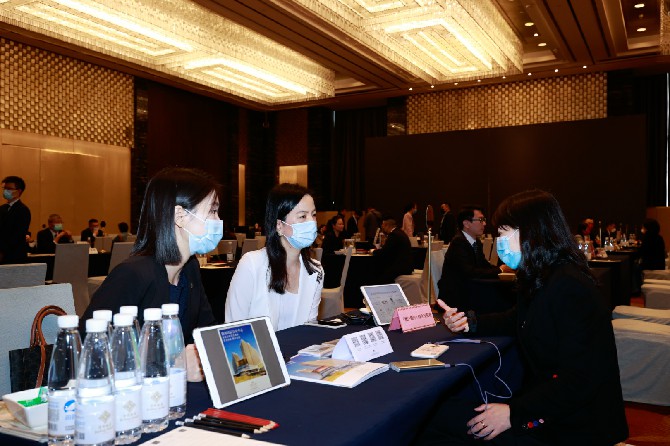 The Macao Government Tourism Office (MGTO) is tapping into the great possibilities offered by meetings, incentives, conferencing & exhibitions (MICE) and gastronomy tourism to build closer affiliation with the travel fraternity in Jiangsu Province.
Director of the MGTO Maria Helena de Senna Fernandes delivered the above commitment yesterday at a MICE-themed seminar in Nanjing, Jiangsu Province, jointly organized by the MGTO and the Macao Trade and Investment Promotion Institute (IPIM). It was part of MGTO’s strategic roadshow “Macao Week in Jiangsu.”
The seminar was intended to showcase Macau’s “Tourim+MICE” endeavors and the status of Macau as a “safe city destination” during the pandemic. It was also designed to ignite more collaboration opportunities between the two places to forge more diverse tourism offerings and extend source markets.
In his opening speech, Lau Wai Meng, president of IPIM, underscored that the MICE synergy between the two places is expected to be vigorous, considering Jiangsu as an economic powerhouse in the Yangtze River Delta and Macau as a key tourism city in the Great Bay Area (GBA).
At the session, the participants unveiled a series of in-depth Macau tours will be launched in mid-May, such as personalized and themed tours for mainland travelers to immerse into the city’s distinguished cultures and “Tourism+” offerings.
Alongside MICE, the MGTO has also been trumpeting the city’s gastronomy to lure Jiangsu travellers.
That same day, Macau’s authorities inaugurated the 14-day Macau Gastronomy Festival at Jiangsu — a gastronomic promotion co-hosted by the MGTO, Jinling Hotel Nanjing, and Macau Cuisine Association dedicated to highlighting the tourism prospects of Macanese cuisine.
During the festival, residents in Jiangsu Province can enjoy a total of 33 signature Macanese dishes at Jinling Hotel Nanjing.