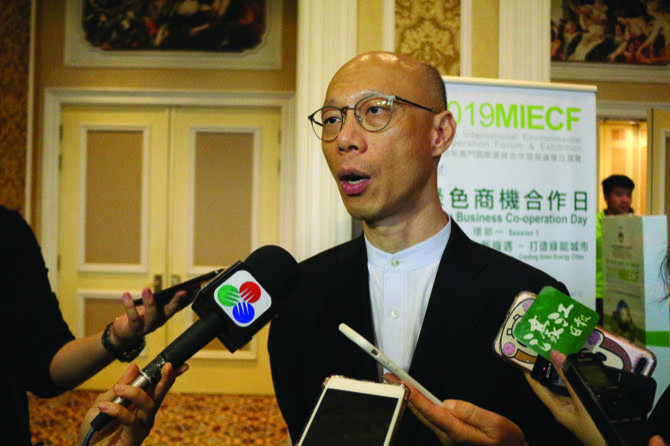 Wong Kam Sing, Secretary for the Environment of Hong Kong

The proposed plastic bag levy that has recently been submitted to the Legislative Assembly (AL) will serve to remind local residents to “bring your own bag (BYOB),” no matter the actual amount of the levy, Secretary for the Environment of Hong Kong Wong Kam Sing has said.

The proposed levy will range from MOP1 to MOP5. The exact amount is expected to be debated and voted on at the AL, as its last step.

Questioned by the press as to whether there would be any negative effect on local residents, citing the higher levy when compared to Hong Kong, Wong remarked, “I think for normal citizens, the regulations are to remind them to BYOB. So for many people, if they are really concerned [about] that, they can BYOB and avoid paying the 50 cents or 1 dollar.”

In Hong Kong, the PSB Levy Scheme, an equivalent measure, kicked off a decade ago and targeted some 3,000 retail outlets during the first phase.

According to Wong, who gave a keynote speech yesterday during the first session of the ongoing Macao International Environmental Cooperation Forum and Exhibition (MIECF), there are still further improvements the HKSAR needs to undertake, despite having the plastic levy in place since 2009.

“Around 2005, there were about 8 billion plastic shopping bags per year, but now it has reduced to about 4 billion. That means there is room for further improvement, given the awareness about reducing single use plastic globally and locally,” Wong told the press.

“But given the rising awareness and the relevant experience in other Asian cities, there is room to review the exemption and also consider whether [the level of levy charged] should be reviewed since it has been intact for a decade,” the official added.

Wong noted that the Macau bureau may review whether there is room for narrowing the exemptions, as there would still be some items that could address food hygiene concerns.

In Macau, the Environmental Protection Bureau expects that the use of plastic bags will decrease by around a half as a result of this levy.

Revenue generated from the plastic levy would go to businesses, the head of the bureau, Raymond Tam, previously said.

The proposal also says that a MOP1,000 fine will be imposed on retailers who fail to charge the levy, while a MOP10,000 fine will be in place for those who do not cooperate with authorities during inspections.

Despite the law proposal, local environmental activists believe that the government should also focus on raising awareness of the issue by promoting education on the use of plastic bags.

The first session of the MIECF Forum also focused on green energy analyses and discussions to promote the building of an innovative platform for green energy exhibitions and exchange between businesses.