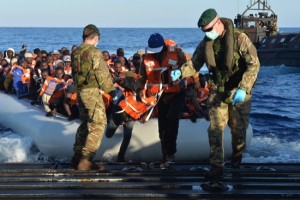 The European Union forged ahead yesterday with a controversial plan to introduce refugee quotas to ease pressure on countries battling the migrant influx, despite strong opposition to the scheme. The EU’s executive Commission sees the quota plan as key to forcing the EU countries to show solidarity with frontline partners like Italy, Greece and Malta. Only five countries handled almost two-thirds of EU asylum applications last year. Under special agreements, Britain, Ireland and Denmark would not be obliged to take part in the scheme. Some countries, including Hungary, Slovakia and Estonia, have already rejected the quota plan, meaning the scheme is unlikely to pass. It would see maximum refugee levels set for each country based on population, GDP and employment levels. British interior minister Theresa May said her country would take no part as it would only encourage more people to make the dangerous sea crossing and risk their lives.

Prince Charles’ secret letters to government officials are set to be released to the public after a long court battle. The 27 contested letters have been called the “black spider” memos because of Charles’ handwriting style. The memos set to be published yesterday have long been sought via a Freedom of Information Act request by Guardian newspaper journalist Rob Evans. Britain’s Supreme Court in March supported a lower court ruling that the letters be published. The government has sought for years to keep the letters out of the public domain for fear that publishing them might damage public perceptions of Charles’ neutrality. As heir to the throne, Charles is expected to stay out of political matters. He has in the past expressed views about architecture, genetically modified food and climate change.