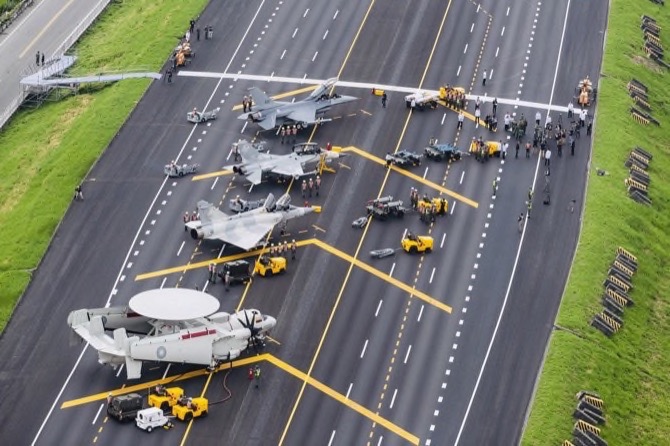 Taiwan landed war planes on a normally busy highway yesterday to simulate a response to a Chinese attack on its airfields, part of annual drills designed to showcase the island’s military capabilities and resolve to repel an attack from across the Taiwan Strait.

Taiwanese President Tsai Ing-wen presided at the exercise in the southern county of Changhua, not far from one of the island’s main air bases at Taichung, which comes amid perceptions of a rising military threat from China, whose rulers claim the island as their own territory.

“Our national security has faced multiple challenges,” Tsai said. “Whether it is the Chinese People’s Liberation Army’s long- distance training or its fighter jets circling Taiwan, it has posed a certain degree of threat to regional peace and stability.”

“We should maintain a high degree of vigilance,” she added.

The drill marked the exercises debut of the first F-16 upgraded to the “V’’ configuration, featuring advanced radar and other combat capabilities. The air force is spending about $4.21 billion to upgrade 144 existing F-16A/Bs to the F-16V version under its “Phoenix Rising” project.

Taiwan is largely dependent on the U.S. for military hardware and has also asked to purchase entirely new F-16V fighters and M1 tanks.

American arms sales to Taiwan have long been a thorn in the side of U.S. relations with China, routinely drawing protests from Beijing that Washington was reneging on earlier commitments.

In a sign of growing security cooperation between Taiwan and the U.S. under the Trump administration, National Security Council Secretary General David Lee met with his U.S. counterpart, National Security Adviser John Bolton, earlier this month, drawing a protest from China.

The visit was the first between national security chiefs from the two sides since the breaking off of formal diplomatic ties in 1979.

While no details were given, Chinese foreign ministry spokesman Lu Kang said Monday that China expressed its “strong dissatisfaction and resolute opposition to [the meeting].”

“We firmly oppose official exchanges in any form between the U.S. government and Taiwan on any pretext,” Lu said. Johnson Lai, Changhua, AP