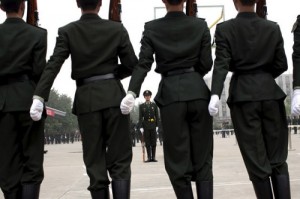 Not many years ago, foreign reporters in China trying to call the country’s secretive military couldn’t even get a connection because phone numbers assigned to the journalists were barred from reaching the Defense Ministry.
Yesterday, they were finally permitted to attend the Defense Ministry’s monthly news briefing, marking a small milestone in the increasingly confident military’s efforts to project a more transparent image.
Restrictions still apply and there is no sign of an improvement in the generally paltry amount and poor quality of information released by the People’s Liberation Army, the world’s largest standing military with 2.3 million members.
Officers who oversee the briefings say the new invitations reflect a desire by the top brass to allay foreigners’ concerns over fast-expanding budgets, vast hardware improvements, and an increasingly clear determination to use the military to assert China’s interests and territorial claims.
“It’s very important that we explain Chinese defense policy in a way that is understood. We especially hope that international society will have a correct and objective understanding of the Chinese military,” spokesman Yang Yujun said at a briefing announcing the change.
Although the People’s Liberation Army remains the house army of the ruling Communist Party — dedicated above all to its survival in power — it’s been eager to portray itself as a force for security and stability by taking part in international forums and peacekeeping missions such as anti-piracy patrols off the Somali coast.
China has chafed against accusations of opacity from the U.S., Japan and others, and now publishes limited status reports on force size, weaponry and missions. It’s also been taking part in an increasing number of joint drills with others, this year joining for the first time the world’s largest international naval exercises hosted by the U.S. known as the Rim of the Pacific. AP