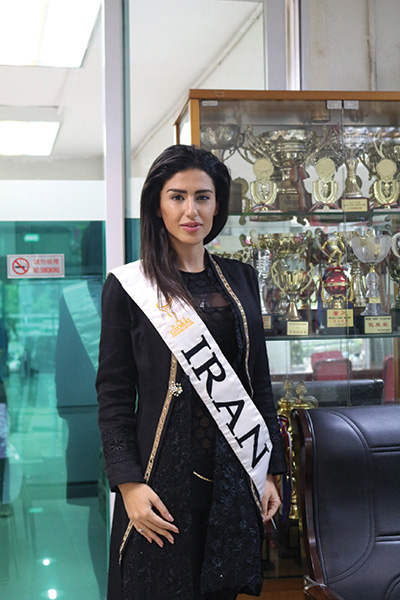 Several tourists have recently claimed to face discrimination at immigration counters upon their arrival in the region. Following on from this, just this week, a recent beauty pageant participant was held for over two hours at the Macau International Airport after it was seen that she holds an Iranian passport.
The Immigration Bureau has previously remarked that discrimination for visitor arrivals does not exist, however Melika Razavi experienced the opposite.
The beauty queen, who lives in Cape Town, represented Iran in Miss Global 2016 held in the Philippines on Saturday, where she was crowned Miss Fitness.
According to her account to the Times, upon entering the region, an immigration officer took her to a room after seeing her Iranian passport, and she was interrogated about her purpose in visiting Macau.
Razavi, who introduced herself to the officers as a professional poker player, was asked to sign documents that would allow authorities to inspect her luggage, personal handbag, and even her mobile phone.
“He asked me to sign a paper to check my luggage. So he opened my luggage, he checked my luggage and he asked me to sign a paper [again] because he wanted to check my phone,” explained Razavi to the Times.
“It was a male going through my stuff, and I was very uncomfortable [with] him searching my underclothing and asking me, what is this? Do I need to explain? It was just very uncomfortable. Very uneasy,” she described.
After scrutinizing her personal belongings, she was asked to present some MOP5,000, which she did not have on hand as she was only carrying some credit cards and Philippine pesos.
The beauty pageant contestant said she has been to Macau before and was never asked to show money, stressing that Macau is the only region that has ever required her to show cash in order to enter the city.
“I showed them my credit cards. I do not carry cash with me because of the past experiences that I had. […] I don’t go to any country and show money,” she explained.
“I showed them four different worldwide [credit/debit] cards, and I asked them, can I withdraw? They said no. […] so I’m just trying to find out how am I going to have cash if [they] are not letting me use the ATM machine,” the Iranian woman complained.
Eventually, the immigration officers informed her that she was refused entry to the city and would be deported back to the Philippines for failing to bring Patacas or Hong Kong dollars with her, even after checking her hotel booking and return ticket.
“The guy just looked at me and said, well, you cannot enter this country without having cash in your pocket. And I first thought it’s a joke,” she shrugged.
“And the last [officer] spoke to me [and said], we’re waiting [for] a flight so we can send you back to the Philippines. I’m not from the Philippines and so it didn’t make sense to me,” the recent beauty pageant contestant described.
Razavi admitted she was deeply offended by the treatment of the officers, adding that her experience was not “welcoming.”
The Immigration Bureau previously described such inspections as part of their “service formalities,” yet it seemed that the investigations were only being done to selected nationalities.
“I feel that I’m being treated like a [part of] ISIS or terrorist, [but] I’m coming here for a good cause,” she said.
Miss Iran in Miss Global 2016 revealed that she had always given a percentage of her poker-
playing winnings to different charities and on this trip to Macau, she intended to donate to local charities. Razavi revealed she was planning to visit two local charities in the region including a home for the aged and an orphanage.
After being told that she was being deported to a country she does not even have visa to, Razavi decided to introduce herself to the officers as Miss Iran and showed them videos of her performances during the pageant.
Razavi told the Times that she was only allowed to enter Macau after she showed  the border police officers a video of her doing some magic tricks in front of the renowned Filipino boxer, Manny Pacquiao.
“[After they] saw the talent trick with Manny Pacquiao, one of the guys tried to help me,” she said. “And at the end, the guy told me, we are giving you one chance to enter this country,” she said.
Razavi expressed her disappointment after the alleged discrimination of her arrival in the peninsula, stressing that she was judged as someone who was participating in illegal activities.
“Am I a terrorist? Am I carrying drugs?” she questioned. “I love the people in this country [sic] that’s why I came back, [but] it was a very bad experience,” she explained.
After being hailed as Miss Fitness in Miss Global 2016, she revealed she would be participating in the upcoming poker tournament in the region this October. Razavi, who reached the Times through “her friend,” lawmaker Pereira Coutinho, was only granted a ten-day visa. Coutinho argued that the case is another example of “over-zealous behavior.”
Although the Macao Government Tourism Office is significantly investing in promoting the city’s tourism offerings, Razavi implied that it should also be outlined how Macau  “welcomes” tourists.

The Times previously reported that several tourists from India were also discriminated by allegedly having to queue in a different line and were interrogated for up to three hours. The tourists have described such border inspections as “humiliating” and “discriminatory.”