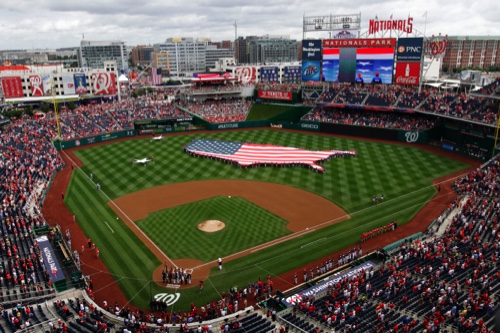 A U.S. flag, in the shape of the country, in the outfield before a baseball game between the Washington Nationals and the Milwaukee Brewers at Nationals Park in Washington

Major League Baseball was sued by four minor league ballplayers who say their freedom to negotiate with other teams is unlawfully restricted by a rule giving their club a right of first refusal to re-sign them when their contracts expire.
The lawsuit was filed on Friday in San Francisco federal court on behalf of all minor league players against a “cartel” run by MLB Commissioner Bud Selig and 30 Major League clubs.
“Minor leaguers are powerless to combat the collusive power of the MLB cartel,” according to the complaint. “MLB continues to actively and openly collude on many aspects of minor leaguers’ working conditions,” such as wages, contract terms and the ability to negotiate with other teams.
The minor leaguers say a reserve-clause provision allowing teams to retain contractual rights to them for seven years artificially suppresses salaries.
Major League players are no longer bound by the reserve clause. Their salaries have increased more than 2,000 percent since 1976, while the pay for minor leaguers has grown 75 percent since then, according to the complaint.
Major League Baseball has long been shielded from anticompetitive claims under an exemption in place since 1922, when Supreme Court Justice Oliver Wendell Holmes issued a three- page opinion that the clubs weren’t subject to federal antitrust laws because they weren’t engaged in interstate commerce. The exemption protected owners from being sued as a monopoly and gave them the power to control the movement of franchises.
The players in Friday’s lawsuit argue the exemption is outdated, especially as it applies to minor league players who aren’t represented by any union to negotiate their compensation.
Paul Haagen, a professor of sports and contract law at Duke University, said that while it’s “conceivable” the exemption no longer applies to MLB, the minor leaguers’ argument is a “steep hill to climb” because courts have consistently upheld the law and deferred any changes to Congress.
“There is some reason to believe the antitrust exemption doesn’t apply to labor matters anymore” after the 1998 Curt Flood Act, Haagen said. The act is named for an outfielder who unsuccessfully challenged the exemption as it applied to player mobility – Flood’s trade to Philadelphia from St. Louis — but ultimately won its annulment in labor issues.
An “aggressive court” could rule that because the baseball exemption is so anomalous, the opening provided by the Flood Act on labor issues could be extended to support the minor leaguers’ antitrust claims, Haagen said.
Pat Courtney, a spokesman for Major League Baseball, said in an e-mail that MLB hasn’t seen the lawsuit and declined to comment further.
The players suing are Sergio Miranda, who was drafted by the Chicago White Sox; Jeffrey Dominguez, who was drafted by the Seattle Mariners; Jorge Padilla, who played in the minors in Florida; and Cirilo Cruz, who was signed by the Houston Astros. Joel Rosenblatt and Mason Levinson, Bloomberg