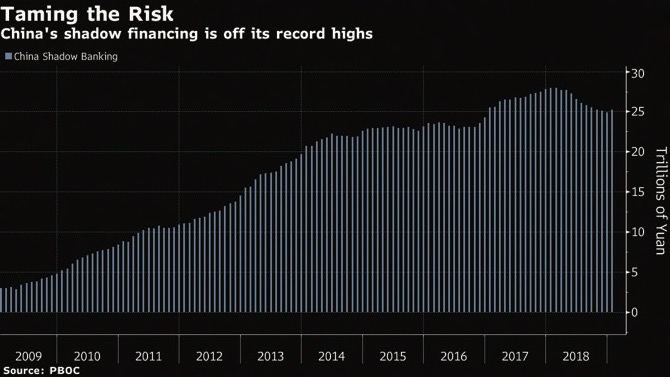 China’s pawn shops may be growing too big for their own good.

Unlike their small-dollar lending, used-guitar selling peers in middle America, pawn shops in Asia’s largest economy have become a major force in the shadow-finance industry. They lent the equivalent of USD43 billion in 2017, often to small businesses and at much higher interest rates than banks. The number of Chinese pawn shops has doubled since 2010 to more than 8,500 and their average loan size exceeds $26,000, versus around $100 in the U.S.

That breakneck growth is now putting pawn shops in the Chinese government’s crosshairs. The country’s banking and insurance regulator is drafting new rules that will toughen oversight of the industry, people familiar with the matter said, asking not to be identified as the matter is private.

The move will target one of the last untouched corners of China’s $9 trillion shadow-banking industry, broadening a more than two-year government effort to put the country on a more stable financial footing. It suggests authorities aren’t finished with their cleanup campaign, despite recent signs that they’ve dialed back deleveraging measures elsewhere to support economic growth.

The China Banking and Insurance Regulatory Commission’s inclusive financing division is drafting the new rules after taking over jurisdiction of pawn shops from the Ministry of Commerce last year, the people said. One of the rules may increase the minimum capital requirement for pawn shops from its current level of 3 million yuan, the people said. While CBIRC oversees the industry, local governments will handle day-to-day supervision, they said, an approach used for peer-to-peer lenders.

China’s pawn shops are often used by small-business owners to access high-cost funds for working capital. More than half of pawn-shop loans extended in 2017 were backed by real estate. And unlike typical bank loans, borrowers don’t need to disclose how the money will be used.

More than a third of China’s pawn shops were loss-making in the first two months of 2018 and their overdue loan ratio exceeded 13 percent amid rising competition with online lenders, official data show. Shares of Sunny Loan Top Co. and Changsha Tongcheng Holdings Co., two China-listed companies that invest in pawn shops, have dropped more than 20 percent over the past three years even as the Shanghai Composite Index gained. Both stocks were little changed yesterday.

In recent years, some outlets have expanded to accept stocks and accounts receivables as collateral, in addition to luxury watches, jewelry, automobiles and properties. To supplement their own capital and increase their capacity to lend, pawn shops have also borrowed from banks.

A typical loan in Shanghai comes with an interest rate of about 2 percent a month, or 24 percent annually, compared with the benchmark one-year lending rate of 4.35 percent. Pawn shops will typically lend up to 40 percent of the value of an apartment pledged as collateral, renewing the loan every six months.

A recent court case in Beijing showed how large such sums can get. The dispute involved a three-month, 4.35 million yuan ($648,000) property- backed loan with a 30 percent annualized interest rate. The borrower ultimately defaulted. Bloomberg