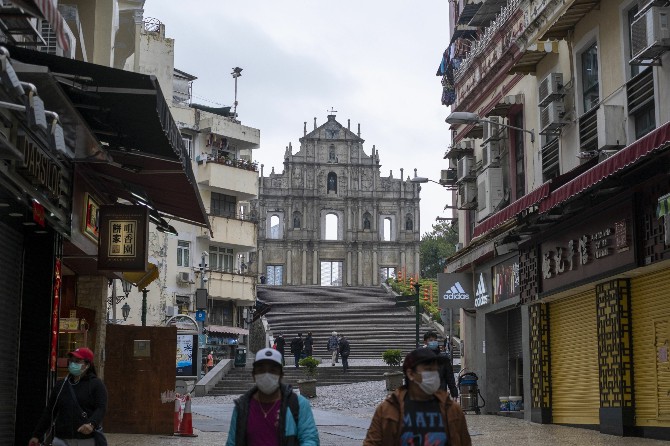 The Macau SAR government has unveiled its plans on the use of the 10 billion pataca economic relief fund, which includes a second round of e-vouchers and financial support to local Small and Medium Enterprises (SMEs).
Presented yesterday at the Health Bureau’s daily press conference, a total of 13.6 billion patacas of public funds will be used, of which 10 billion patacas will be spent through the Macao Foundation and 3.6 billion patacas from the government’s account.
The second round of e-vouchers will be provided and paid for from the government’s account.
The 5,000 pataca e-vouchers will be issued to all Macau residents, permanent or non-permanent, based on their registration. The issuing and use period will be between August and December this year.
Similar to the first round of economic relief actions, Lei Wai Nong, the Secretary for Economy and Finance, stressed that the extra e-voucher and other elements of the 10 billion pataca fund are being provided in the hopes of supporting the entire population of local residents.
That said, subsidies will be available for workers of various professions, including taxi drivers, hawkers and freelancers.
Salary support will also be given to each eligible local employee. The amount of the salary support available is 15,000 patacas in total. Civil servants, as well as employees who will receive an income tax refund of 20,000 patacas for the financial year of 2018, will not be eligible.
The amount was calculated against the city’s median income of 20,000 patacas. The government took a 25% portion (5,000 patacas) to start with. The initiative is intended to help employees with three months of income, and will be paid in a lump sum of 15,000 patacas.
Any local employee with an active income tax registration as of March 31 this year will be eligible for salary support, the official said. In addition, the means of payment will be similar to that of the Wealth Partaking Scheme – or the cash handout – every year. It means that if a resident has registered to receive the cash handout through bank transfer, they will receive the salary support in similar manner, provided they are eligible. The Financial Services Bureau (DSF) will host a website for eligibility inquiries.
As for subsidies for SMEs, the government will give 15,000 patacas to 200,000 patacas, depending on the number of employees the company has. Calculations will be based on the registration with the DSF as of March 31. For taxable companies that run more than one outlet, a maximum of 1 million patacas can be received from the government.
The government has set a condition on this subsidy, however. Within six months of receiving the funds, the recipients must not unreasonably dismiss any employee. Furthermore, public service providers, formal education institutions, social welfare entities and casinos will be exempted from the subsidy.
Freelancers, or those registered as Group 2 Salaries Tax Payers, can apply for an interest subsidy on their bank loan amounting to a maximum of 100,000 patacas. A maximum of 4% of the interest or no more than 8,000 patacas, will be issued.
Existing employees will be eligible for a 5,000 patacas subsidy if they participate in and finish a training course offered by the government. Those who are unemployed can receive 6,656 patacas under the same circumstances. They will also be given job opportunities as they finish their training.
Meanwhile, expiry dates of taxi licenses, if any, will be extended for six months. Taxis bearing licenses that will not expire will have their mandatory vehicle examination date postponed for six months.
Taxi drivers, hawkers, tricycle riders and wet market stall tenants will each receive a 10,000 pataca subsidy.
However, the Legislative Assembly is still working on the first round of budget amendments submitted by the government. Questioned on when the second round of budget amendment would be dealt with, Lei disclosed that government would submit the motion to the legislature in mid-April using an urgent procedure and hopes it will be passed in late April. Certain subsidies should be expected in May.
As most of the subsidies cover local residents only, the secretary was questioned on whether the government was overlooking non-resident workers. The secretary did not agree with the comment.
“It does not mean that the government is not aware of the contributions that non-resident workers have made to the city’s development,” the official emphasized. “Given other restrictions, the government needs to prioritize local residents.”
The secretary also expressed his gratitude for the contributions these non-resident workers have made to the city.
When asked about his view of economic diversification, Lei hinted that Macau should embrace Hengqin for further development and diversification. “Physical space [for development] has been the main challenge,” Lei said. “We can’t expect much diversification with such a small area.”
He told the press conference that aside from all Macau residents, Hengqin is an opportunity for Macau. The local government will continue to communicate with the neighboring city to achieve further integration.

Lei: Further inflation unlikely
With two rounds of e-voucher schemes, the official does not think that companies will raise their prices, given the current economic conditions. In other words, inflation caused by the e-voucher scheme is unlikely, according to the secretary.
“The number of visitors to Macau is literally at [a low],” the secretary said, hinting that the city was now dependent on Macau people to help Macau companies. “The second round of e-vouchers is the fruit of in-depth consideration.”
The secretary disclosed that a review would be conducted around late June to early July to evaluate the effectiveness of the scheme and its pressure on the consumer price index, however. The result of the review may lead to a change in the criteria of the second round.