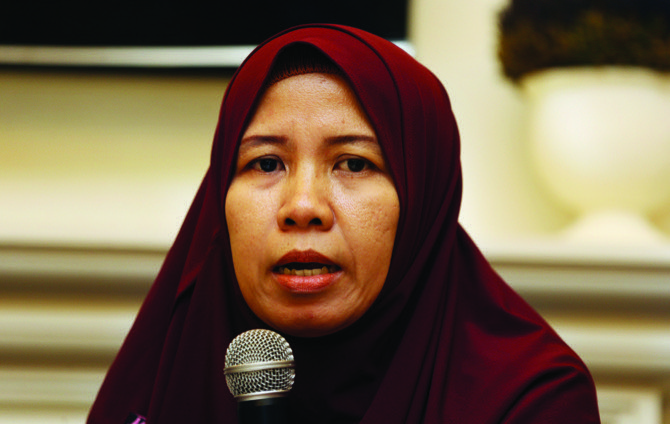 Merdian Agustin, family of a victim of the Lion Air jet that crashed into the Java Sea

More families of victims of the Lion Air crash in Indonesia are suing Boeing Co. after its chief executive apologized and said a software update for the MAX 8 jet would prevent further disasters.

Family members and lawyers said Monday that CEO Dennis Muilenburg’s comment last week related to an automated flight system was an admission that helps their cases.

The anti-stall system is suspected as a cause of the Lion Air crash in October and an Ethiopian Airlines crash in March that also involved a MAX 8 jet. The two crashes killed a total of 346 people.

Preliminary reports into both crashes found that faulty sensor readings erroneously triggered the anti-stall system that pushed the plane’s nose down. Pilots of each plane struggled in vain to regain control.

Families of 11 Lion Air victims said at a news conference organized by Jakarta law firm Kailimang &amp; Ponto that they are joining dozens of other Indonesian families in filing lawsuits against Boeing.

“Boeing’s CEO explicitly apologized to 346 passenger families,” said Merdian Agustin, whose husband died in the crash. “We hope this is good momentum to have compensation rights.”

Agustin, the mother of three children, said that she and dozens of other families have not received USD85,000 compensation they are entitled to in Indonesia because they refused to sign a “release and discharge” document that extinguishes their right to sue Lion Air, Boeing or their subsidiaries.

“We refused to sign such a document containing statements that are treating our loved ones like lost baggage,” Agustin said. “It’s ridiculous and hurts us.”

Boeing acknowledged that the sensor malfunctioned and Muilenburg said last week that a new software update would prevent future incidents. “It’s our responsibility to eliminate this risk,” Muilenburg said in a video statement. “We own it, and we know how to do it.”

Lawyer Michael Indrajana said that since the crash, families in Indonesia have faced a complicated and painful process against Boeing and Lion Air in their battle to get compensation.

He said the Boeing CEO’s statement shows the airline is now acknowledging responsibility.

“No amount of money can bring their loved ones back,” he said. “We want to fight for the orphans, so they have the opportunity to get a better future.”

Boeing said last week that it will cut production of its troubled 737 Max airliner this month, underscoring the growing financial risk it faces the longer that its best-selling plane remains grounded after the two crashes.

The company said that starting in mid-April it will cut production of the plane to 42 from 52 per month so it can focus its attention on fixing the flight-control software that has been implicated in the crashes.

The move was not a complete surprise. Boeing had already suspended deliveries of the Max last month after regulators around the world grounded the jet.

Boeing also announced it is creating a special board committee to review airplane design and development.

The announcement to cut production comes after Boeing acknowledged that a second software issue has emerged that needs fixing on the Max — a discovery that explained why the aircraft maker had pushed back its ambitious schedule for getting the planes back in the air. Niniek Karmini, Jakarta, AP