More than 20 charged with rioting appear in Hong Kong court 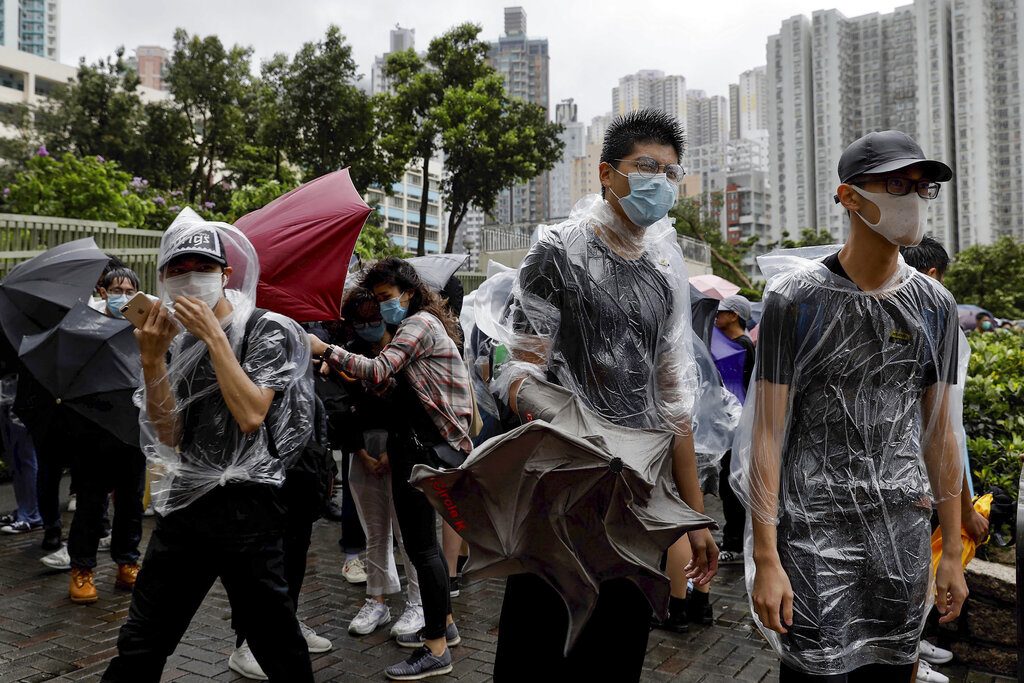 Protesters brace themselves against the strong wind and heavy rain as they gather outside the Eastern Court in Hong Kong, Wednesday (AP Photo/Vincent Yu)

HONG KONG — Charges were read today (Wednesday) against more than 20 Hong Kong protesters who have been accused of rioting — the most serious charge brought since mass demonstrations began in the city last month.
Standing in a heavy rain, supporters rallied outside the court and chanted “Reclaim Hong Kong, revolution of our times,” in what has become a familiar refrain. They are protesting China’s influence in the city, a semi-autonomous Chinese territory with its own laws and legal system.
Police said late Tuesday that 44 people had been charged with rioting and one other with possessing offensive weapons. The accused set up roadblocks, broke fences, damaged street signs and attacked police officers with bricks and iron rods, law enforcement said in a statement.
Only 23 appeared in court Wednesday, and all were released on bail. They have to hand over their travel documents and are not allowed to go out in the hours from midnight to 6 a.m. Their sentencing is scheduled for Sept. 25. It was not clear when the others charged will appear in court.
They were detained after clashes with police at an unauthorized protest in the western part of Hong Kong island on Sunday, when police repeatedly fired tear gas and rubber bullets to drive back protesters blocking the streets with road signs and umbrellas. Police issued warnings prior to using the tear gas, but protesters stood their ground and threw eggs at the officers.
The large demonstrations started last month as a movement against now-suspended extradition legislation, and have since grown to encompass broader demands around greater democracy and government accountability.
The protests have been propelled by an underlying distrust for the ruling Communist Party on the mainland, where speech is tightly controlled and dissenters are routinely jailed.
News of the charges prompted quickly organized protests outside two police stations late Tuesday.
Several hundred people gathered in the streets outside the Kwai Chung police station. Some threw eggs at the building, while police used pepper spray to try to disperse them. Some had cordoned off an area at a subway station covered in shattered glass where they said an officer had used a firearm.
Fireworks were set off just before 3 a.m. at another police station, injuring six men. Video footage on social media appeared to show a car driving by the Tin Shui Wai police station as fireworks flared where protesters were gathered.
Five people were taken to a hospital and the sixth man declined medical treatment at the scene, police said. It wasn’t clear who was responsible.
As the demonstration seeped into the early hours of Wednesday, protesters and supporters remained highly wary of being identified by the authorities and suffering potential retribution at their places of work and study. Volunteers handed out face masks and single-trip subway fare cards that would prevent riders being identified and their trips logged in a central data base, while drivers who had taped paper over their license plates offered rides home.
Hong Kong lawmaker Kwok Ka-ki told reporters that the prosecution of protesters and use of police force will only make the situation worse. He blamed Beijing-appointed Chief Executive Carrie Lam.
“The origin of all the violence is Carrie Lam and the very controversial extradition bill,” he said, adding “she should come out today to answer to all the requests of most of the people in Hong Kong.”
Kwok also criticized China’s repeated statements supporting police efforts to quell the protests, saying Chinese backing would not heal the city.
Police have been deploying an increasing range of crowd control measures, including tear gas, pepper spray, rubber bullets, shotgun beanbag rounds and sponge grenades fired from barrel-mounted grenade launchers.
MDT/AP