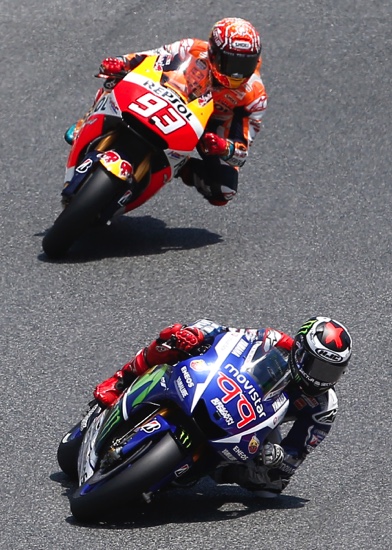 Jorge Lorenzo won his fourth straight race in a Yamaha one-two finish with Valentino Rossi at the Catalonia Moto Grand Prix yesterday, tightening the championship fight between the teammates.
The two-time former champion’s 37th career MotoGP victory left him one point behind Rossi at 138-137 in the championship standings. “After seven races we have one point of difference and the same speed, so it will be interesting,” said seven-time former champion Rossi.
Marc Marquez saw his bid to defend his title take another blow when he crashed out for a second straight race while trying to overtake Lorenzo.
Lorenzo had a great start from third on the grid and never gave Rossi an opening after going past pole sitter Aleix Espargaro and Suzuki partner Maverick Vinales. He then negotiated the 25 laps of the 4.7-kilometer Barcelona-Catalunya Circuit to win in 42 minutes, 53.208 seconds.
Rossi crossed less than a second later, followed by Honda’s Dani Pedrosa in third, almost 20 seconds off the pace. “Valentino pushed me so hard, but at the end the effort was worth it,” said Lorenzo, whose winning run includes the Spain, France and Italy MotoGPs.
After starting from fourth on the grid, Marquez had moved up into second by the third lap when he lost control of his Honda trying to overtake Lorenzo on the outside and ended on his side in the gravel. He also failed to finish the last race in Italy and in Argentina.
With 69 points, Marquez’s hopes for a third straight title are fading with 11 races left. “When you are at home and want to win no matter what, these things happen,” said Marquez. “I made a mistake and couldn’t break.”
Marquez wasn’t alone. Aleix Espargaro and brother Pol Espargaro, Andrea Dovizioso, Cal Crutchlow, Nicky Hayden, Yonny Hernandez and Marco Melandri all failed to finish.
Earlier, Moto2 leader Johann Zarco of France overtook two riders in the last two laps to get his second win of the season.
Defending champion Tito Rabat entered the last lap in first place, but finished third behind Alex Rins. Zarco leads Rabat 134-94 in the standings.
Danny Kent of Britain won an exciting Moto3 race that saw six riders reach the last lap in a leading pack.
Kent edged Enea Bastianini by 0.035 seconds, with Efren Vazquez crossing third. Kent leads Bastianini 149-98 in the standings.
The next race is in the Netherlands on June 27. AP