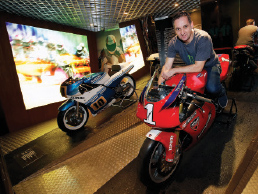 The Suncity Group Macau Motorcycle Grand Prix – 48th Edition produced a classic helping of excitement during the first of two qualifying sessions.
Fastest in the morning practice session, Michael Rutter (Milwaukee Yamaha) immediately demonstrated the way the track had rubbered in during the day by going faster than he had during the morning, and put provisional pole three seconds out of reach of the rest of the field.
The remainder of the busy session saw more and more riders improve their times by similar margins, and it was triple-winner Stuart Easton (PBM by Venetian Hotel Kawasaki) who got closest to Rutter. Still the holder of the lap record set on his last visit to the Guia Circuit in 2010, Easton ended just .301 seconds adrift of provisional pole.
Always quick in both practice and qualifying, Martin Jessopp (Riders Motorcycles BMW) was third on the provisional grid, heading up a clutch of riders all with times in the two minutes-thirty second bracket – and what a clutch.
Last year’s winner Ian Hutchinson was fourth, exactly the same position he held at this point in the proceedings last year (but on another of the Paul Bird machines this time), and just ahead of John McGuinness.
Sixth placed Horst Saiger (Saiger-Racing.com Kawasaki) was last of the riders in the 2.30.0 bracket, and the five riders splitting the 2.31 bracket spread out to eleventh-placed Peter Hickman, but the Macau debutant was unlucky to drop his Ice Valley by Motorsport BMW at Teddy Yip Bend on the last flying lap of the session. Tenth-placed Jamie Hamilton (Wilson Craig Honda) was even luckier to bail out just before he joined in with Hickman’s incident. Both riders walked away as the chequered flag was being waved at the startline.
That left Rutter on provisional pole, but Hutchinson where he was a year ago, and one more qualifying session ahead. A year ago Hutchinson used the second session to claim pole and went on to win, but this year there are so many potential winners clustered in the space of a single second on the stopwatch that predictions are impossible.