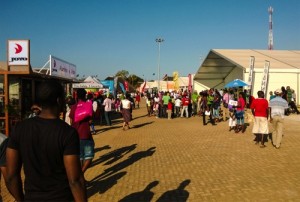 The opening of the 50th edition of the Maputo International Fair (Facim), on Monday, was attended by around thirty businesspeople from Macau, who visited the exhibition as part of a mission organized by the Macau Trade and Investment Promotion Institute (IPIM).
Seeking investment opportunities in Mozambique, a country that has maintained annual growth rates of around 7 percent, a business delegation from Macau travelled to Facim as part of the “10th Meeting of Businesspeople for Commercial and Economic Cooperation between China and the Portuguese-speaking Countries (PLP),” IPIM director Eco Chan told Macauhub.
“Lately, IPIM’s participation in the fair has mainly aimed to bring companies from Macau to Mozambique so they can seek out investment opportunities. This year, we have brought about 30 companies from various industries such as infrastructure, banking and services,” said Eco Chan.
Stressing the importance of the event in the economic context of sub-Saharan Africa, the IPIM director also noted the importance of Mozambique as an export destination adding that IPIM had attended Facim for a number of years.
According to the Mozambique Institute for Export Promotion (Ipex), the fair’s promoter, this year’s Facim has 2,650 exhibitors, of which 2,000 are Mozambican and 650 are foreign, representing 26 countries and territories. The fair has several temporary pavilions set up in its grounds, which are some 30 kilometers from Maputo, in the suburban town of Ricatla, in the district of Marracuene.
As in previous editions of the fair, Portuguese companies have taken up the largest number of stands, around 200, which, according to Portuguese deputy prime minister, Paulo Portas, who attended the opening of the fair, shows that “Mozambique is increasingly a key country in Portugal’s economic relations.”
Yesterday, businesspeople from China and the PLP, as well as representatives of foreign trade agencies from these countries, are due to meet with a view to increasing trade relations as part of the 10th China-
PLP business meeting, held in Maputo until today and sponsored by Ipex in partnership with IPIM and the China Council for the Promotion of International Trade (CCPIT).  MDT/Macauhub