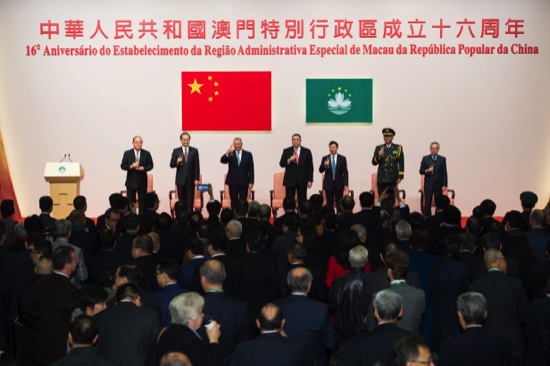 Chief Executive Chui Sai On has pledged to push forward with efforts to combine the gaming and non-gaming industries at a time when diversified economic and regional collaboration is highly emphasized.
The CE’s pledge came at a reception on Sunday marking the 16th year after Macau’s return to China, which he was attending prior to a trip to Beijing on Monday.
“In the coming year, the development of Macau will still be affected by the complicated and ever-changing external environment. We believe opportunities always come with challenges,” he said in an address.
“We are pleased that China’s Thirteenth Five-Year Plan clearly states the aim of fully leveraging Macau’s unique advantages, coupled with elevating Macau’s position and functions in national economic development, and opening up policy,” he continued.
The Chief Executive believes that the local government’s own version of the five-year plan, which was announced last month, would complement the central government’s blueprint in highlighting its strategy of “one belt, one road.”
“Through top-level planning and supportive coordination, it helps Macau to realize better growth and integrate with the country’s overall development,” he expressed.
On the sidelines of the ceremony, Chui told media it was evident that, over the past two years, the “added values of the non-gaming elements in sever major industries were undeniably encouraging.”
His statement points to the industries of architecture, finance, hotels, retail and catering.
Furthermore, he stressed that the offerings at the resort complexes that should emerge in the future must be predominantly non-gaming. “We also have applied a ratio of nine to one [of non-gaming to gaming elements] for the new integrated resorts. Ninety percent has to be non-gaming elements,” he said.
Chui also said that, in the next two years, the authorities would continue their commitment to pushing for a more diversified economy.
He said: “We’re also confident that given the integration of the two sides, the government would be inclined to support adequate diversity, and small and medium-sized enterprises.”
Speaking of the gaming earnings in the next year, Chu remained confident about the outlook of the casinos and stressed that “there would be a surplus.”

The Secretary for Administration and Justice, Sonia Chan, disclosed on the sidelines of the reception that she would reinstate Raymond Tam  as a senior technician in the Civic and Municipal Affairs Bureau, given that the presidential post has been granted to Alex Vong. Tam is the former bureau head and was embroiled in the cemetery corruption scandal. Another official involved, Lei Vai Long, is expected to return to the bureau’s administrative committee as the vice-president.