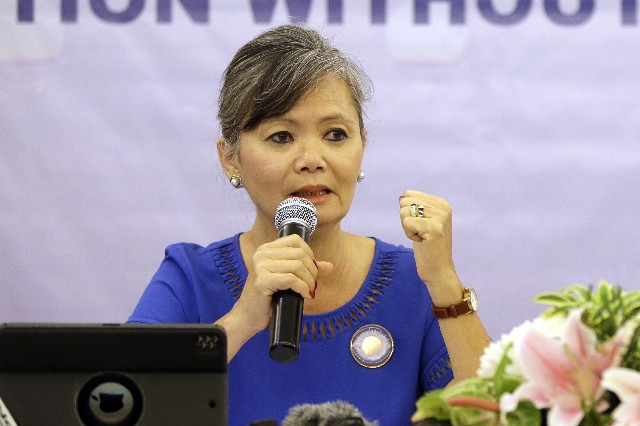 Thailand has barred a top leader of Cambodia’s opposition party from entering the country, casting doubt on plans for its exiled leaders to return to their homeland against the Cambodian government’s wishes.
Mu Sochua, a former lawmaker of the court-disbanded Cambodia National Rescue Party, said she was deported Sunday after arriving at Bangkok’s international airport.
Party co-founder Sam Rainsy has declared that he and other exiled colleagues plan to return to Cambodia on Nov. 9, along with a mass of Cambodian supporters who also live outside the country. While Thailand has never been publicly specified, it is the only practical location for such a plan. Thailand hosts hundreds of thousands of Cambodian migrant workers, and Cambodia’s other neighbors are its political allies with authoritarian governments.
Cambodian Prime Minister Hun Sen has said security forces would stop or arrest the would-be returnees, whom he has called traitors. He said Tuesday that he had already given instructions to the armed forces on how to deal with Sam Rainsy and his supporters and did not intend to talk more about the subject.
Mu Sochua, who is the opposition party’s deputy chief, told said by phone from the United States yesterday that the group was in contact with Thai lawmakers about its situation and would also send a message to Thailand’s government explaining its reasons and intentions.
“We remain confident and hopeful that Thailand will understand,” she said.
“There are other ways to go to Cambodia,” she added, without specifying further but asserting the group’s determination to carry out its plan. She said some 300-400 overseas Cambodians planning to join the return would be meeting in Seattle this coming weekend.
Thai foreign ministry spokeswoman Busadee Santipitaks said she had no information about Mu Sochua’s deportation, and declined to comment about how Thailand’s relations with Cambodia might be involved.
Hun Sen’s government has reacted furiously to the opposition plan, thundering almost daily about its intentions to block it and threatening anyone supporting it with arrest and long prison sentences. Dozens of people have been detained.
Sam Rainsy has been active in using social media to rally support for his party.
“My calls to the people and the armed forces of #Cambodia to rise up against the regime will continue until the regime has restored to the opposition its right to participate in the country’s political life including genuine elections,” Sam Rainsy said on Twitter in late September.
A party statement on Oct. 3 took a gentler approach, saying: “We are going back because we believe in the power of dialogue. Our only means to achieve change is the power of word and conviction. We have no arms. Our political mission is peace and reconciliation, prosperity and dignity, unity and strength.”
Sam Rainsy has been Hun Sen’s most prominent and popular foe for decades. He went into exile in late 2015 to avoid a two-year prison sentence on charges of criminal defamation. Other legal cases have since been lodged against him by the government.
Other top party members fled into exile during a late 2017 crackdown on all opposition to Hun Sen, which included the party’s dissolution, the shuttering of virtually all critical media and the arrest of the party’s other co-founder, Kem Sokha. He was charged with treason, based on his links to a U.S. pro-democracy organization, and is under strict house arrest.
The Cambodia National Rescue Party had been expected to mount a strong challenge in the July 2018 general election, and its dissolution was widely seen as being politically motivated, with Hun Sen’s ruling Cambodian People’s Party fearful that it could lose power in the polls. Cambodia’s courts are widely seen as being under the influence of the government, and its ruling suggesting the opposition party was involved in treasonous activity was dismissed by critics as spurious. JERRY HARMER & GRANT PECK, AP