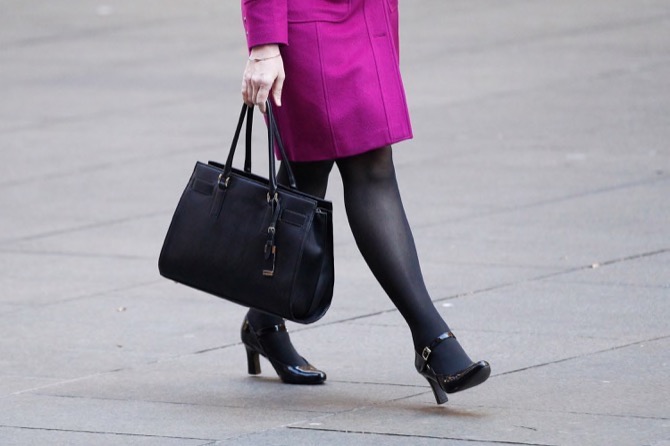 Few multinational companies would publicly advertise some U.S.-based jobs to women and others to men. In Mexico, though, some have listed gender preference right alongside qualifications like “education” and “experience.”

Discrimination on the basis of sex is illegal in both countries, but in Mexico, it remains a regular—and open—practice. According to a Bloomberg analysis of more than 10,300 job ads posted during one week in August on the popular Mexican job site OCCMundial, more than 800 specified male or female applicants.

Most were for local firms, but not all. Staffing giants Kelly Services, Adecco and Manpower designated some of their Mexico-based postings for men or for women. Home Depot Inc. was recruiting male sales associates. VF Outdoor Services sought a woman with “excellent presentation” and “emotional intelligence” for an executive assistant role. Several local car dealerships did the same, along with Hyundai Glovis, a logistics subsidiary of the Korean car company.

The data examined by Bloomberg showed that, overall, ads targeted men for more senior or managerial positions. Women were recruited for secretarial and customer service roles. Job ads seeking men also offered higher salaries than openings for the same position but a preference for women.

Those companies say the ads Bloomberg found aren’t consistent with their policies or practice and have been fixed. Nonetheless, they illustrate the challenge of connecting company rhetoric with on-the-ground operations around the world. In August, Home Depot joined nearly 200 companies in signing a letter from the Business Roundtable that promised to foster “dignity and inclusion” in their operations. On its website, VF Corporation touts its “Global Women’s Advisory Council” and its promise to achieve gender parity in its senior leadership by 2030.

“This was an oversight for several job postings by stores in Mexico,” a Home Depot spokesperson said in an email. “The job postings have been corrected and this has been addressed with the stores that posted them. Home Depot does not discriminate in hiring practice and is always looking for the best talent for the specific position.”

Hyundai Glovis said the job ads reflected an error made by a new employee. “The part about gender was deleted immediately, the HR staff will be trained in company policy and law, and HR hiring processes will be strengthened,” the company said in a statement. “Hyundai GLOVIS Mexico does not discriminate on gender-related acts when hiring employees.”

“Unfortunately, a small percentage of job postings in Mexico that did not reflect our commitment to diversity and inclusion were brought to our attention and we have taken immediate action to correct these,” a spokesman for Manpower said in an email. “We continue to review job posts on an ongoing basis to ensure they reflect our position on diversity and our commitment to equal employment opportunities.”

Kelly Services said its recruiters in Mexico are trained and informed on compliant and ethical employment practices in the regions where they operate, and that the company “now will place postings to recruit individuals who are most qualified for the job duties at hand, without regard to immutable personal attributes.” Addeco said that in Mexico, it has policies to prevent any mention of gender in a job posting “unless there is a legitimate reason,” and that it was looking into the job ads flagged by Bloomberg.

“Global companies should make sure that any standards they say they’re holding themselves to are observed the world over,” said John Paul Rollert, a behavioral science professor at the University of Chicago Booth School of Business and “in-house ethicist” at the Chicago Booth Review. “If they’re not, people will find out and they’ll be held to account.”

OCCMundial is owned by SEEK Ltd., a $4.8 billion tech company based in Melbourne, Australia, that owns and operates job sites around the world. Sergio Porragas Moreno, OCCMundial’s Chief Operating Officer, said the site’s terms and conditions forbid discrimination in job postings, and the site retains the right to remove any post deemed “illegal or abusive” following a formal investigation.

“It’s a form of gender discrimination that’s unfortunately very common in the country,” said Gonzalo Sanchez de Tagle, a constitutional lawyer and author of the new book, “The Political Constitution of Mexico City.” “It’s 100% illegal, but a lot of labor rights violations go unnoticed or unreported.”

Using data captured by a Quaretaro, Mexico, firm, Bloomberg analyzed 10,334 job ads in the country’s main economic hubs over about a week in August. The data captured openings in some of the country’s biggest and fastest growing industries: logistics, sales, administration, engineering and manufacturing.

More than 800 postings specified a gender preference, more often for men than for women. Administrative jobs, mostly for receptionists, secretaries and assistants, accounted for almost half of all the openings seeking women. Sales jobs, including customer service representatives and cashiers, represented 38%.

By contrast, nearly one-third of the listings seeking men were for drivers, forklift operators, storekeepers or other logistics positions. Another 28% were for manufacturing jobs, including supervisors, technicians and inspectors.

Sales accounted for just 12% of the openings seeking men, but unlike the sales positions seeking women, they were more likely to be for management jobs or other, more senior titles.

“There’s growing awareness over these issues, but there’s still a lot of discrimination in the work culture in Mexico,” said Alexandra Haas, president of Mexico’s National Council to Prevent Discrimination, or Conapred.

More than 40 countries still allow gender discrimination in hiring. Another 50 place at least some restrictions on women’s work, according to the World Bank. Where discrimination is illegal across the board—in Mexico, the U.S. and elsewhere—it’s still common, just more subtle, Haas said. In several languages, including Spanish, job titles can be specifically masculine or feminine—recepcionista, for example, or as Deloitte specified in a March ad, asistente ejecutiva. Employers in Mexico can request a photo with a job application, another way to screen for gender, race or simply appearance.

In most industries, there’s a deep imbalance, with fields dominated by men or by women; so-called women’s work also pays a lot less, said Rita Ramalho, researcher for a World Bank study on women’s rights across 187 countries. This dynamic reinforces the gender pay gap, she said. “It’s not only that less women are actually working, but when they do work, they are more likely to earn less than men.”

The gender pay gap and discrimination in hiring have become hot-button issues among the global economic elite in recent years, in part because the full economic enfranchisement of women is good for overall productivity. Closing the global gender pay gap would add $32 trillion to global GDP, according to the most recent estimate from the World Economic Forum.

Even in countries where discrimination is legal or even tolerated, U.S. companies are ethically responsible for following their own best practices on gender equality, said Kabrina Chang, business ethics and law professor at Boston University. The job ads in Mexico are “an example of using an outdated, unsubstantiated stereotype to deny women equal opportunity,” she said. “No matter where that happens, it’s not good for women.” MDT/Bloomberg