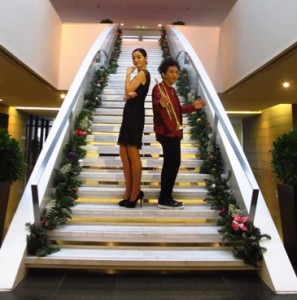 The up-and-coming Korean band Winterplay will grace the region with its first-
ever performance in Macau tomorrow night at the Macau Cultural Centre.
With a distinct sound and famed for their strong-beat dance songs, the group’s primary members are trumpeter-songwriter Juhan Lee and female singer Haewon. When the band was formed in 2007, together they decided to forge their own path, creating a unique style of pop-jazz music.
Having garnered some fame in Asia and parts of Europe over eight years, the group is finally coming to Macau. They hope to deliver a spectacular performance and will perform a new song specially arranged for this gig.
The group achieved success in the highly competitive industry in their home region while retaining their uniqueness.
“When you’re doing your own thing, especially if it’s kind of a new genre in Korea, pop-jazz, you don’t really have the time to see what other people are doing. We’re too busy trying very hard to make it work,” Juhan Lee said.
“Our dream is to showcase our music in many different countries. It’s a very selfish thing, that every musician wants to showcase their music, not only in his own country, but in many other countries as well,” he added.