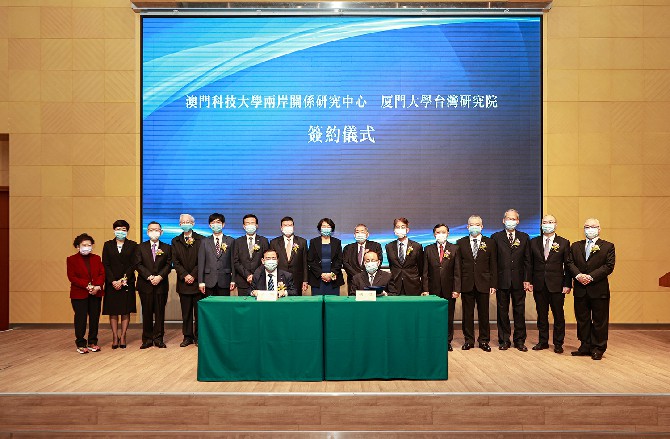 Macau University of Science and Technology (MUST) has established a new research center dedicated to exploring topics and studies related to cross-strait relations between Macau and Taiwan.
Yesterday, the university held an inauguration ceremony to mark the opening of the center.
The new center is aimed at coordinating Macau local researchers with overseas scholars to study “cross-strait relations” and “Macau-Taiwan relations” in addition to “Macau’s special function in the new era of the cross-
strait relations.”
The center is a subdivision under the leadership of the Institute for Social and Cultural Research (ISCR) of MUST.
“Our mission is to promote the peaceful development of cross-
strait relations,” Wu Kan, director of the new center told the media on the sidelines of the ceremony.
The center will organize symposiums and seminars about cross-strait relations, and will also publish journals and documents about related topics.
“We want to make the center an international-class research base,” said the director.
According to Wu, in the foreseeable future, the department plans to set up several research bases covering topics from history to law.
Speaking at the inauguration ceremony, Yan Zhichan, deputy director of the Liaison Office of the Central People’s Government in the Macau, believes that the establishment of this new center will boost the research power of Macau in matters of cross-strait relations.
“The establishment of the center will help strengthen Macau’s research power in the field of cross-strait relations, promoting non-governmental and academic exchanges between Macau and Taiwan and between the two sides. The center will help Macau to function as the window, bridge, a link and a platform between the two sides,” said Yan. “[The center] will have positive effect on the telling of the story of the success of the One Country, Two Systems [principle in Macau].”
During the inauguration ceremony, Li Peng, dean of the Faculty of Taiwan Research of Xiamen University, one of mainland China’s top universities, gave a speech on cross-strait relations.
In Li’s opinion, 2020 was the year where cross-strait relations were at their “severest” point since 1979.
“Official communications between the two sides were paused, the external environment of the Taiwan issue has never deteriorated more, the U.S. countermeasures against mainland China, civilian communications were significantly impacted,” he said.
“Covid-19 cut off the communication between the two sides, public opinion was against each other in the era of new media, and Taiwan and the U.S. ‘tainted’ the story of Hong Kong incident, making people in Taiwan change their views on mainland China,” added Li.
Forecasting the development of the cross-strait relationship in 2021, the scholar said that “the situation [in Taiwan] does not have conditions for major positive changes; China-U.S. relations will take a long time to reconcile, and there are uncertainties in the two sides in regards to resuming communication, given the pandemic situation and politics.” Staff Reporter