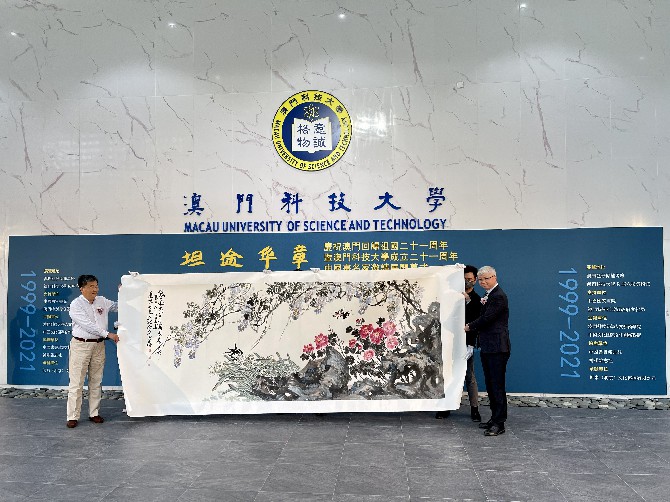 The Macau University of Science and Technology (MUST) held an exhibition to celebrate Chinese painting arts, and stressed the importance of the marking of the 21st anniversaries of both the Macau SAR and MUST with the event.
It also commemorates the mutual assistance, unity and joint endeavors of the peoples of mainland China and the Macau SAR.
At the opening ceremony, the tertiary education institution highlighted the city’s excellent achievements over the last two decades under the implementation of the principles of “One Country Two Systems,” Macau residents governing Macau, and the city’s high degree of autonomy.
Shang Hui, Supervisor for Doctor of Philosophy in the Fine Arts Program, emphasized in his opening speech that in the 21 years since the establishment of the Macau SAR, the cooperation and interaction between the SAR and mainland China has become much stronger and dynamic as each year has passed.
He recalled that in the 1950’s during the renaissance of Lingnan-style Chinese painting, Macau played a crucial role.
After the ribbon-cutting ceremony, Yu Yong, standing vice president of The Alliance for International Cooperation and Innovation of Chinese Culture, a co-organizing entity of the exhibition, donated a scroll painting of approximately 1.7 meters by 3 meters to MUST. The gift was received on behalf of the university by vice president, Professor Pang Chuan.
Both Yu and Shang wished the exhibition a great success.
Held in the gallery on the sixth floor of the university’s “R” Academic Complex, the free exhibition showcases a collection of Chinese paintings by about 100 mainland and Macau painters.
In a statement, the university describes the paintings as “filled with adoration towards the motherland of mainland China and towards the Macau SAR, as well as depicting the rich warmth and harmonious joy experienced by residents on both sides of the Taiwan Strait.”
Following yesterday’s opening ceremony, a seminar was held at the university to discuss the art of Chinese painting, as “it is a prominent constant in the Chinese artistic vault and an artistic gem of Chinese ethnicity,” according to a representative of the university.
At the seminar, participating academics, scholars, artists and guests discussed the ideas and development, inheritance and innovation, as well as internationalization of this form of Chinese art. They also discussed the status quo and the modes of cooperation between mainland China and Macau in relation to Chinese painting.