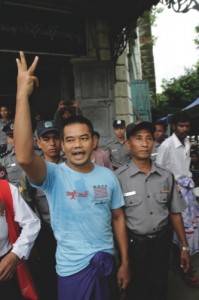 Activist Htin Kyaw, left, shouts as he is escorted by Myanmar polices after his trial at a district court in Yangon

By marching through the traffic-choked streets of Myanmar’s busiest city, handing out leaflets that lambasted the new nominally civilian government, Htin Kyaw showed how much the country has changed since emerging from military rule. With charges filed in all townships he wound through as he made his way to city hall, he has become a symbol, too, of how has much stayed the same.
The rights activist was found guilty yesterday of disturbing public order — the 11th sentence he has faced from that days-long march through Yangon in late April and early May.
Township court by township court, his sentence has grown. He is now slated to spend the next 12 years and four months behind bars, according to his wife, Than Than Maw.
“The relentless efforts of the Myanmar authorities to silence a critical voice must end immediately,” said Rupert Abbott of rights group Amnesty International. “The charges … are farcical. He has done nothing but express his opinions.”
Myanmar has been grappling with political reforms since 2011, when the repressive junta ceded power to a government headed by President Thein Sein. It released thousands of political prisoners and eased media restrictions, but once again is prosecuting people for expressing themselves or peacefully protesting.
Most have been charged under a law that bars protests without a permit, or another that prohibits spreading statements that cause alarm or inflame others to act against the state.
Scores of human rights defenders and activists have faced multiple trials for the same charges.
Kyaw, currently being held in the notorious Insein prison, is no stranger to jail time.
In late 2013, during the trumpeted period of reform, he was sentenced to 33 months for holding other peaceful protests. He benefited then from Thein Sein’s amnesty order, which released him and dozens of other political prisoners in December.
Htin Kyaw continued to stage protests on land rights issues, and called for justice after a crackdown on a copper-mine protest left several Buddhist monks injured.
He’s been in jail, this time around, since May 5, when he was arrested for his long, meandering demonstration through Yangon’s streets, calling on Myanmar’s government to resign.
The Shwe Pyi Thar Township court yesterday slapped Kyaw with two years, the maximum permitted. Charges are still expected in the 12th and final township he marched through.
“What the courts are doing is a blatant human rights violation,” said his lawyer, Robert San Aung. Aye Aye Win, Yangon, AP