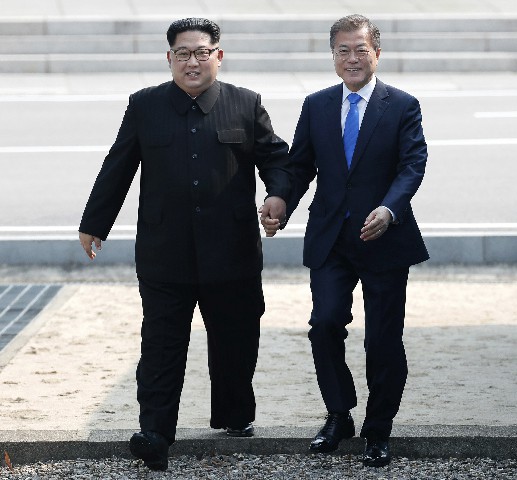 Blaming its rival for a recent chill in relations, North Korea yesterday said its leader turned down an invitation by South Korean President Moon Jae-in to participate in a regional summit next week.
The announcement continued North Korea’s current hardball approach with Washington and Seoul following months of unprecedented summitry as they near an end-of-year deadline issued by the North’s leader, Kim Jong Un, for the U.S. to salvage fragile nuclear talks.
North Korean officials in recent weeks have insisted that Kim has no interest in another summit with U.S. President Donald Trump unless the North gets something substantial in return. They have also called for the United States to end “hostile” policies against the North, apparently referring to its enforcement of sanctions and pressure, and permanently halt joint military exercises with the South for any progress in negotiations.
The statement carried by the North’s official Korean Central News Agency said there is no reason for Kim to visit the South under “beclouded air” and accused Moon’s government of failing to uphold agreements reached between the leaders in three summits last year.
KCNA said Moon’s office sent a letter on Nov. 5 inviting Kim to attend a summit Moon is hosting in the southern city of Busan for Southeast Asian leaders on Monday and Tuesday. The agency said South Korea asked the North to send a special envoy to the meetings if Kim couldn’t come.
The statement repeated demands that South Korea break away from the U.S., accusing the Moon government of harming inter-Korean cooperation with its continued dependence on Washington.
“If [South Korean officials] think they can easily turn around the present serious situation with just a piece of letter, they would be seriously mistaken,” the statement said.
“We will never follow without reason the impure attempt of [the South Korean] side to give impression that dialogue is going on between the top leaders […] although no settlement of the fundamental issues between [the Koreas] […] is being made.”
Moon’s office expressed regret, saying Kim is missing out on a rare opportunity to meet other Asian leaders. It said the Korean leaders should meet often to discuss peace and cooperation, but did not directly address the North’s criticism of Moon’s policies.
Nuclear negotiations with North Korea have faltered since the collapse of a February summit between Kim and Trump in Vietnam, where the U.S. side rejected the North’s demand for broad sanctions relief in exchange for a partial surrendering of its nuclear capabilities.
Working-level talks last month in Sweden broke down over what the North Koreans described as the Americans’ “old stance and attitude.”
North Korea has suspended virtually all cooperation with South Korea amid the standstill in negotiations with the United States, while demanding that Seoul defy U.S.-led international sanctions and restart joint economic projects that would aid the North’s broken economy.
In their third summit last September in the North Korean capital of Pyongyang, Kim and Moon vowed to restart visits by South Korean tourist groups to the North’s Diamond Mountain resort and normalize operations at a joint factory park in the North’s border town of Kaesong when possible, voicing optimism that sanctions could be lifted to allow such projects.
But without a breakthrough in the nuclear talks between Washington and Pyongyang, the economic projects remain shelved.
North Korea has threatened to tear down South Korean-made hotels and other facilities at the Diamond Mountain resort that Kim called “shabby” while vowing that North Korea would redevelop the site on its own.
“As nothing was achieved in implementing the agreements made in Panmunjom, Pyongyang and Mount Paektu, [an inter-Korean] summit for the mere form’s sake would be pointless,” KCNA said.
Panmunjom is a jointly administered border village that hosted the first two summits between the leaders last year. Kim and Moon during their Pyongyang meeting visited Mount Paektu, a volcano North Koreans consider sacred, in a gesture of engagement.
Kim said during his meeting with Moon in Pyongyang that he would visit Seoul “at an early date,” which Moon said meant before the end of 2018, but didn’t follow through. Kim Tong-Hyung, Seoul, AP