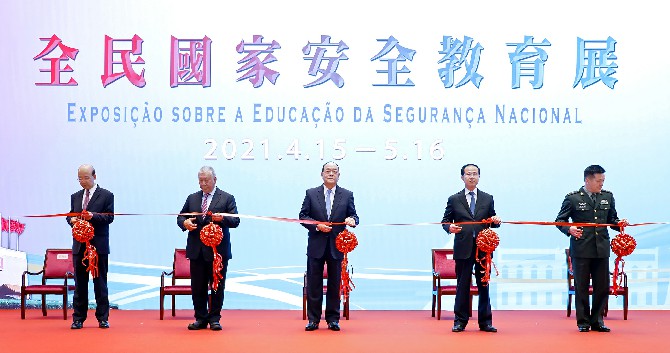 The SAR government unveiled the fourth National Security Education Exhibition yesterday. It serves as a platform to bolster public awareness of national security and promote the notion of patriotism in Macau, Chief Executive (CE) Ho Iat Seng stated in the opening ceremony.
In Ho’s opening speech, he stressed that the exhibition has been rolled out at an opportune time, as 2021 marks the 100th anniversary of the founding of the Communist Party of China. It is also the first year of the 14th Five-Year Plan, which was approved at the National People’s Congress during the annual Two Sessions in March and sets out the nation’s major economic and political goals for 2021-2025.
“[The exhibition] was launched at a right moment to give the public a summary of the nation and Macau’s extraordinary journey in safeguarding national security over the past year; to recap the obligations for [achieving] a comprehensive concept of national security; and to showcase the country and Macau’s new developments and plans in response to changes in internal and external environments,” Ho said.
Fu Ziying, director of Liaison Office of the Central People’s Government in the Macau SAR, stressed that the world is currently facing unprecedented changes in this century. They include a fiercer rivalry between superpowers, intensified moves by the US and some Western countries to hinder China’s development, and so on.
When faced with the challenges raised by the pandemic and changes in internal and external environments, Ho pledged to continue to double down on strengthening national security.
To this end, the government will continue to optimize the legal system and mechanisms for better enforcing and defending national security.
The authorities will also ensure that the principle of “patriots governing Macau” is fully implemented, and “resolutely oppose any external forces interfering with Macau’s affairs”, Ho emphasized.
Improving education on the constitution and basic law within the schooling system is also high on the agenda. Ho said it is imperative to the overall national security and Macau’s development to instill the significance of the “One country, two systems” principle into local youths.
In 2015, the Standing Committee of the 12th National People’s Congress approved the National Security Law of the People’s Republic of China, and timed the annual National Security Education Day on April 15.
The National Security Education Exhibition, located at the China-Portuguese-speaking Countries Commercial and Trade Service Platform Complex, will open to the public in Macau from yesterday afternoon to May 16.
Hong Kong’s government also held a symposium yesterday to commemorate the nation’s sixth National Security Education Day. It was the first National Security Education Day after the National Security Law took effect in Hong Kong last year.
Hong Kong’s chief executive Carrie Lam Cheng Yuet-ngor yesterday also reaffirmed her commitment to safeguarding national security for the nation and Hong Kong.