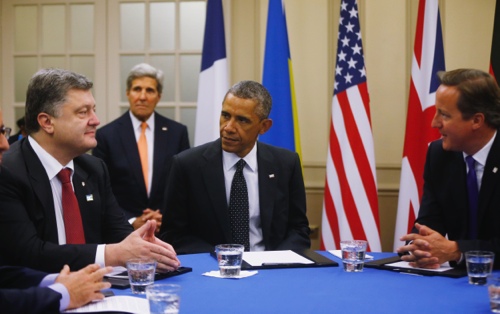 U.S. President Barack Obama, center, is seated at a table with Ukraine President Petro Poroshenko, left, and British Prime Minister David Cameron as they meet about Ukraine at the NATO summit at Celtic Manor in Newport, Wales

Russia’s foreign minister warned yesterday that Ukraine’s NATO ambitions are threatening to derail peace talks in eastern Ukraine. Undeterred, Ukraine’s president began a meeting with U.S. President Barack Obama and other top NATO leaders in Wales.
Russia and Ukraine said Wednesday they are working on a deal to halt months of fighting in eastern Ukraine. Russian President Vladimir Putin spelled out a seven-point plan for ending hostilities and expressed hope for a breakthrough at talks in Minsk, Belarus, today.
But Foreign Minister Sergey Lavrov said in televised remarks yesterday that statements by senior government officials in Kiev that Ukraine will be seeking to join NATO are “a blatant attempt to derail all the efforts” to seek a peaceful solution in Ukraine.
NATO leaders are meeting this week for a summit at a golf resort in southern Wales. Before official proceedings began, Ukrainian President Petro Poroshenko attended a meeting with Obama and leaders of four major European powers in the alliance: British Prime Minister David Cameron, French President Francois Hollande, German Chancellor Angela Merkel and Italian Prime Minister Matteo Renzi
Poroshenko was to meet later in the day with heads of state and government from all 28 NATO member states. NATO officials have made clear that membership for Ukraine isn’t in the cards anytime soon, but the alliance is expected to express solid support for Poroshenko’s government and announce an increase in nonlethal aid for Ukraine’s military.
Yesterday morning, NATO Secretary General Anders Fogh Rasmussen accused the Russians of continued meddling in Ukraine despite Putin’s proclamation of a peace plan.
“What counts is what is actually happening on the ground,” Rasmussen said. “And we are still witnessing, unfortunately, Russian involvement in destabilizing the situation in eastern Ukraine. So we continue to call on Russia to pull back its troops from Ukrainian borders, stop the flow of weapons and fighters into Ukraine, stop the support for armed militants in Ukraine and engage in a constructive political process. That would be a genuine effort to facilitate a peaceful solution to the crisis in Ukraine.”
Pro-Russian separatists have been fighting government troops in eastern Ukraine since mid-April in a conflict that the U.N. estimates has killed nearly 2,600 people.
Rebels have made substantial advances against Ukrainian forces over the past two weeks, including opening a new front along the coast of the Sea of Azov. That offensive has raised concern that the rebels are aiming to take control of Mariupol, a major port city of about half a million people, and secure a land corridor between Russia and the Crimean Peninsula that Russia annexed in March. AP 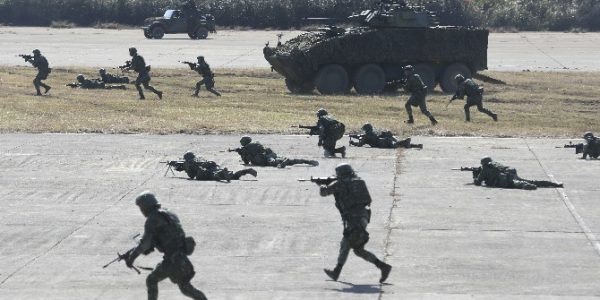 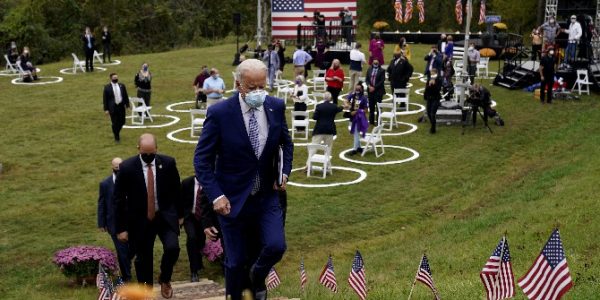 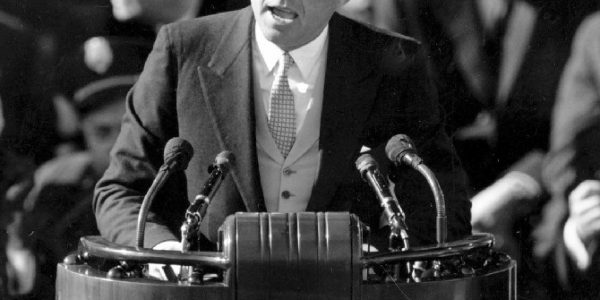