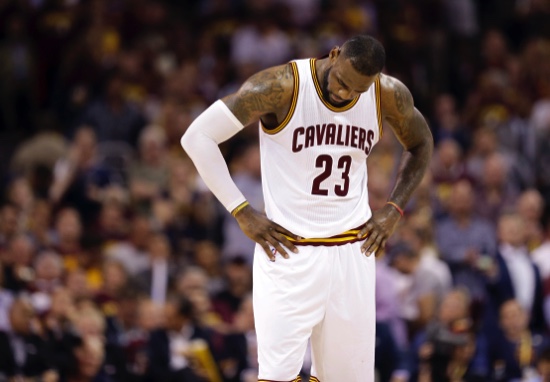 LeBron James pulled off his sunglasses, and there was no hiding the hurt in his eyes. He had given everything he had, the best player turning into a better teammate, and it wasn’t enough.
“If I could have gave more, I would have done it, but I gave everything I had,” he said Tuesday (US time) after Cleveland’s 105-97 loss to Golden State in Game 6 of the NBA Finals.
And that’s more than just points, rebounds and assists. Throughout the year had proven what it meant not just to be the star but to be the leader, even more during the NBA Finals.
“What’s evident to everyone is what a spectacular basketball player that LeBron is. But he has become a great leader of his team,” coach David Blatt said. “He’s become a guy that has evolved in terms of his role within the team and within the whole concept of what it is that we want to be about.”
James believed he could will Cleveland to a championship, with a confidence that turned almost defiance. Even as the Golden State Warriors had asserted themselves as the series went on, James said he didn’t doubt the Cavaliers could win until the clock reached zero.
James finished with 32 points, 18 rebounds and nine assists in another tremendous individual effort, but his outmanned Cavaliers lost the final three games.
His fourth loss in six NBA Finals trips left him wondering briefly if he’d be better off just missing the playoffs entirely, so it would hurt less.
“I didn’t win a championship,” he said, “but I’ve done a lot of good things in this first year back and hopefully I can continue it.”
He couldn’t end Cleveland pro sports’ lengthy title drought, a 51-year stretch that’s been so tough even some local fans believe in the so-called Cleveland Curse.
But they also believe in James, the 30-year-old Northeast Ohio son who came home from Miami last summer and brought life back to the Cavaliers franchise.
He couldn’t bring them their first title, not with what he had left around him in these NBA Finals. Kevin Love had been lost to a dislocated left shoulder in the first round. Then Kyrie Irving went down with a fractured left kneecap in Game 1 of this series.
James still willed the Cavaliers to a 2-1 lead and was so good there was even talk that he could join Jerry West as the only NBA Finals MVPs from losing teams.
Cavaliers fans sure believed he should have, the ones who remained to watch the award celebration booing loudly when Golden State’s Andre Iguodala was announced as the winner.
His departure for Miami in 2010 had turned the locals against him, led them to burn his jerseys in the streets. There was anger, hurt, even hatred in their voices when they jeered him when he came back for the first time with the Heat.
He became a two-time champion in Miami, but more importantly grew up, learned what it would take to lead a team. He returned more mature than when he left, announcing his decision with a thoughtful essay, a sharp contrast to his widely criticized TV special in 2010.
He became a more assertive leader. He was already the best player.
It was a little surprising to hear him call himself that after Game 5, when he said he was still confident because he was the best player in the world. He usually leaves talking about his greatness to others.
But having belief is one thing; having sufficient help is another. James didn’t, and the effort in trying to carry a team was too much even for one of sports’ most gifted athletes. Brian Mahoney, Cleveland, AP